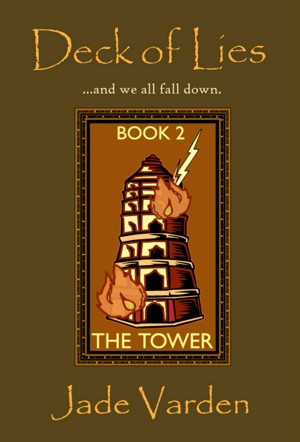 By Jade Varden
Rated 4.20/5 based on 5 reviews
Death brings some families closer, but it's ripped mine apart. I wanted to convince the police that they had the wrong suspect...but I never expected them to start suspecting me. Now, I have no choice but to keep searching for the truth, even if all my relationships fall to pieces around me. More
A Tower of Lies...

Someone is trying to make me look guilty. I never thought my mission to prove my own innocence would lead me to more family secrets. I thought I had already discovered the truth about myself. But every answer raises more questions, and everything I think I know is about to change...again.

Jade Varden is a teller of tales from Louisville, Kentucky. The Deck of Lies series is the first in several young adult series and stand-alone novels Jade will publish in 2012 and 2013.

The Tower Book Trailer
Book trailer for Deck of Lies, Book 2: The Tower by Jade Varden. This YA novel continues the family saga of deception, secrets and lies that unfold in the four-book series. A killer remains at large...and at least one person has already died. Who's next? Follow @JadeVarden. Visit jadevarden.blogspot.com for details.

Also in Series: Deck of Lies 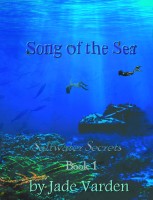 Reviews of The Tower (Deck of Lies #2) by Jade Varden

Fast paced YA drama with a murder investigation thrown in. I would rank five stars except for a few things I find irritating: the cliffhanger ending and the little quips from a time in future commenting on an action or decision that is just staring place.

Rain is firm in her belief that River did not kill Lauren like everyone says. She is determined to find a way to prove his innocence. She just isn't expecting to become a suspect herself, or to find out that her world is about to become even more drama-filled.

This book was amazing. The same quirks as the first one were still present, the little cliffhangers in various chapters and scene ends, but the story is fast-paced and keeps you hanging on for dear life. The twists and turns are amazing and well thought out. Some things you see coming, but a lot of it is just tossed at you out of nowhere. The Von Sheltons have so many skeletons in their closet.

Other than a severe lack of River and the awful cliffhanger at the ending, this book was fantastic. It hooks you in and keeps you there. Great continuation to this series.


While Rain is figuring out who she and her family really are, she is also trying to find Laurel Riordan’s killer. Rain knows that the answer to these questions will either lead her out from under the craziness her life has become or will send her further down the spiral into doom.

Jade Varden is the author of the Deck of Lies series, currently there are 3 books in the series with book 4 coming soon. The books are YA fiction and are told in a first person narrative from the point of view of the main protagonist.

The story continues in this installment and it becomes more interesting and convoluted as it unfolds. While Rain is working through the lies that created her life, she remains relatively unchanged. Her name may have grown and changed but she is still the same person.. Once again there were many surprising and shocking events, with an interlocking connection appearing between the characters.

This is not a standalone novel, and in fact it ended with a cliff-hanger. I am curious to find out what happens next and where this story is going to end. I recommend this book as a good read.

For more of my reviews go to http://books-treasureortrash.com

Not again! One more time the ending left me waiting for more. The Tower is the perfect sequel to a great story and it really didn’t disappoint me. Jade Varden has created another EXCELLENT book and really deserves a round of applauses.
This series only keeps proving my point -we are who we are because of the choices we made. Every time we say, do, think or see something, we are lead to a choice, one that not only affects us but all the people around us as well.
In this book we see Rain still struggling to adjust to her new life and everything that comes with it. She’s still learning who is she supposed to be and what others expect of her. But a murder keeps her in the eye of the storm. Our leading lady hasn’t discovered all the secrets yet and she might not be ready for what is to come.
Rain is becoming a strong woman and we continue seeing her evolution. She is true to herself through the whole deal and maintains the essence we saw in the first book.
Some of the characters are showing their true faces, we finally see the real Owen. We see her making alliances with some unthinkable people.
The story surprised me on every page, it keeps revealing secrets, lies, and more of the past. And what is most important along the story we have glances of the future, some lines lets us see how things will work out.
There were many fragments that I loved. Not only because I think that like his predecessor is very well written, The Tower has minor thoughts worth reading. Like the fact that sometimes we seek truth, justice, thinking that will make us free and help us move forward. But we can be wrong, because the truth we find only sinks us deeper.
It’s really an amazing book, with drama, mystery, friendship, self-discovery, redemption and one of my favorite characters.

(Source: Downloaded for free from Smashwords.)
Well, once again we have a very cryptic blurb for this book, and once again this book is full of mystery, and lies upon lies are uncovered.

I’m not going to tell you too much about this book, because not knowing what is going to happen is part of the fun, but once again poor Rain is in for a rough ride.
In book 1 (Justice), Rain’s life was turned absolutely upside down and back to front by a prank played on her by a girl at her new school, and now, on top of all the drama still going on surrounding that event, Rain has a murder to solve.
A girl at her new school was strangled to death, and Rain’s only friend – River, has been accused of her murder and locked up in jail. Rain knows that River could never hurt someone like that, no matter what other people are saying about him, and she knows that any evidence they have is fake. What she doesn’t realise is how tightly interwoven her own life and the dead girl’s are.

Once again, Rain’s life is further shattered by lies told by those older than her, and this time she’s worked out one hell of a complicated family tree, connecting several teens at her school. The question still remains though; who had the means and will to murder one of her classmates? And what were they trying to hide?

I really enjoyed this book. I picked this one up straight after finishing the first one,’ cause I couldn’t wait to find out what happened next! This book picked up pretty much where the last one left off, but this time we had more than one mystery to solve, and once again, layers and layers of deceit. It’s difficult to say much without giving too much away, but this book is just so cryptic, and has such a complex storyline, the mind boggles.
I love Rain, she has such a fresh, clear voice, and you can totally image her saying and doing the things she does. She’s also incredibly normal, even when she feels guilt for telling white lies.
I have to say that the ending left me wanting more! It was a bit cryptic – Rain knows who the murderer is and how they covered it up, but she doesn’t actually tell us! Thanksfully though, there is more to come, and I am really looking forward to the next book – ‘Death’.
8 out of 10.
(Book Length: 3819)

You have subscribed to alerts for Jade Varden.

You have been added to Jade Varden's favorite list.

You can also sign-up to receive email notifications whenever Jade Varden releases a new book.