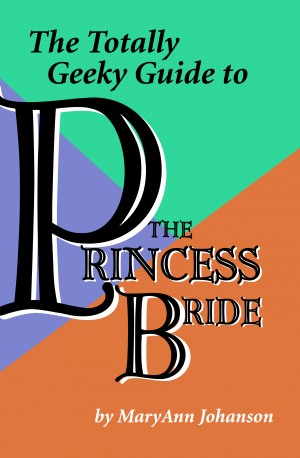 The Totally Geeky Guide to The Princess Bride

By MaryAnn Johanson
Do you know the Three Terrors of the Fire Swamp? Have you fallen victim to one of the Classic Blunders? If you’d love to surrender to the Dread Pirate Westley, then you need this breezy deconstruction of the cult-favorite movie by popular and respected film critic and geek-watcher MaryAnn Johanson.

“One of online’s finest” film critics (*Variety*), MaryAnn Johanson is a New York City-based freelance writer on film, TV, DVD, and pop culture. She is the webmaster and sole critic at FlickFilosopher.com -- which debuted in 1997 and is now one of the most popular, most respected, and longest-running movie-related sites on the Internet -- and she is a regular contributor to Film.com. She was nominated BEST ONLINE CRITIC, 2010 National Entertainment Journalism Awards (Los Angeles Press Club). Her film reviews also appear in a variety of alternative-weekly newspapers across the U.S. Johanson is one of only a few film critics who is a member of The International Academy of Digital Arts and Sciences (the Webby organization), an invitation-only, 500-member body of leading Web experts, business figures, luminaries, visionaries and creative celebrities. She is also a member of the Online Film Critics Society (and serves on its Governing Committee) and the Alliance of Women Film Journalists. She has appeared as a cultural commentator on BBC Radio and on local radio programs across North America, and she served a judge at the first Science Fiction, Fantasy and Horror Film Festival at the 2003 I-Con, the largest SF convention on the East Coast.

Review
rosesiren reviewed on Oct. 22, 2010
(no rating)
Mary Ann Johanson is an excellent writer and this is an enjoyable read. :D

You have subscribed to alerts for MaryAnn Johanson.

You have been added to MaryAnn Johanson's favorite list.

You can also sign-up to receive email notifications whenever MaryAnn Johanson releases a new book.