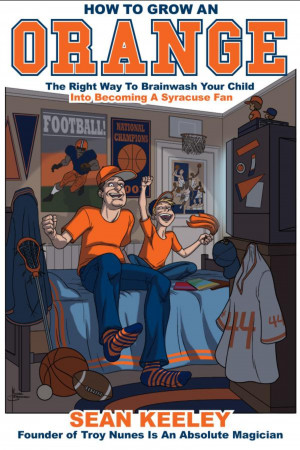 How to Grow an Orange: The Right Way to Brainwash Your Child Into Becoming a Syracuse Fan

By Sean Keeley
Rated 4.75/5 based on 4 reviews
Being a parent is hard. Make the wrong decisions and your child can grow up to do something terrible, like root for Georgetown. How To Grow An Orange shows every parent how to make sure that never happens...by providing them with everything they could ever possibly want to know about Syracuse University sports. No Orange fan should be without this guide to the people, places and history of SU.

Born in New Jersey, Sean Keeley spent four years at Syracuse University where he earned a Marketing & Entrepreneurship degree that he has yet to use. In 2006, he created Troy Nunes Is An Absolute Magician, which has grown into the No. 1 Syracuse sports blog on the Web. He also writes for SBNation.com and is currently editing Maple Street Press' Orange Tip-Off 2010-2011 Syracuse Basketball Preview. Sean has also written five screenplays, two of which he's happy to show you. He lives in Seattle with his wife Lucy, who does not care about Syracuse sports at all.

How To Grow An Orange book trailer
Being a parent is hard. Make the wrong decisions and your child can grow up to do something terrible, like root for Georgetown. How To Grow An Orange shows every parent how to make sure that never happens...by providing them with everything they could ever possibly want to know about Syracuse University sports. No Orange fan should be without this guide to the people, places and history of SU.

If you don't like this book, you hate America... well at least the part of America that is Syracuse University.

I did not attend Syracuse University. The closest I got was attending college in Rochester, some 90 minutes away. As such, while I was aware of the fact that there was a university there and that that university fielded teams in a number of sports, their success, failure, or tradition was never much concern to me. In fact, since I had grown up in an area that was dominated by professional sports teams, and my school of choice did not have any Division 1 programs, the entire college sports landscape was something that might have existed on another planet. Then I got married. My wife, who grew up in a suburb of Syracuse and whose father, uncle, and aunt were all alumni had been attending games with her family for two decades by the time she and I met. Cheering for SU came as naturally to her as breathing. Since I suddenly found myself with a college team to cheer for, I needed to come up to speed quickly on the history and tradition of the school so that I could talk smack intelligently at the local pub. If only I had this book handy during that time. In the interests of full disclosure, I am a daily visitor and commenter to Mr. Keeley's blog, so his sense of humor and reporting style are familiar to me. That having been said, even someone with no knowledge of his writing before finding this book would find it as entertaining as it is informative. It is both a personal narrative into Keeley's own time as a student at Syracuse-documenting events and encounters not necessarily unique to that institution-and also a guide to the history of the school's three major sports teams (football, basketball and lacrosse). The book is accessible to the neophyte Orangeman not only because of the amount of detail and context provided, but also because it is clearly written by a fellow fan (even one who admittedly was raised rooting for the school's hated rivals). The book is not a comprehensive history of any person or event associated with the university, nor is it meant to be. The academic historian would undoubtedly take note with its lack of references and bibliography to support what is clearly extensive research. However they would be missing the point of the book entirely. While the title and format suggest a tongue-in-cheek manual for brainwashing your offspring to cheer for Syracuse athletics, it might well also be titled "An Idiot's Guide to Syracuse Fandom." Armed with the information herein, any barroom trivia contest or tailgating discussion should easily be mastered. This book ought to be assigned to incoming freshmen at SU as mandatory reading before they are able to purchase their student tickets to sporting events. They will find it invaluable in understanding the traditions they are supporting, and give hope that the football team will turn it around some season, and if not, there's always basketball and lacrosse around the corner.

Awesome! A must-read for any Syracuse fan.
Can't wait for the printed version so I can add it to my library.

Best book I've read this year. I recommend it to any Syracuse fan, and I will be first in line to buy the printed version if and when that is complete.

The book was just what I was hoping it would be. A great look at some of the SU history I didn't know, the humor that I expect from Sean and the reliving of all gut wrenching SU football moments of the last decade. My biggest hope is that all his praise for HCDM proves to be correct. That and he publishes another book this week, because Monday flew by as I read the entire book at work.

You have subscribed to alerts for Sean Keeley.

You have been added to Sean Keeley's favorite list.

You can also sign-up to receive email notifications whenever Sean Keeley releases a new book.