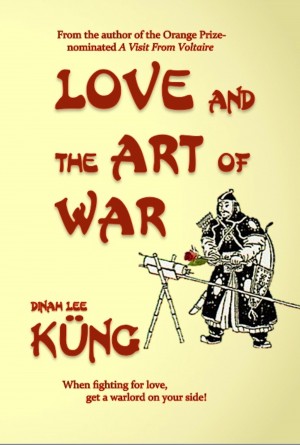 Love and the Art of War

Dinah Lee Küng worked for twenty years as a reporter in Asia writing for among others, The Economist, The International Herald Tribune, The Washington Post, and BusinessWeek. She won the Overseas Press Club's Award for Best Humanitarian Coverage in 1991 and her comic novel, A Visit From Voltaire, was nominated for The Orange Prize for Fiction in the U.K. She is the author of six novels and a number of plays, including the radio play "Dear Mr Rogge," which won a commendation in the BBC World Service Playwriting Contest of 2008. She and her husband, a retired International Committee of the Red Cross delegate, have three adult children and live in Switzerland.

(If she uses Sun Tzu's tactics for a happy household, she's not confessing and her husband isn't complaining.)

Dinah Lee Küng worked for twenty years in Asia as a foreign correspondent, mainly in China/Hong Kong, for publications including The Economist, Business Week, and the International Herald Tribune. She is the author of six novels, a number of radio plays and was nominated for the Orange Prize for Fiction in 2004. She has three children and is the wife of a retired International Red Cross official living outside Geneva.

What a fun premise: Meek librarian discovers her beloved husband might be having an affair and reacts in the only way she is equipped for: signs up for a local seminar. However, though she signs up for "Mending Marriage or Decent Divorce" in 96F, she winds up in "The Warlord Way to Waging Profit" (or "China's Military Genius for Maximizing Management") in 96E. She starts to leave – but if she leaves, the class will not have enough students to continue; the professor works his wiles on her to convince her the class could be useful to her.

'Well, I'm trying to keep a family united, not all of China.'
Professor Baldwin took a deep breath. 'But all of Cathay isn't as important to you as that family.'

And she stays. And as the weeks go by, as the rest of the class applies the tenets of Sun Tzu to their business affairs and she does her best to apply them to her husband's affair, things change. Jane changes.

I love a good turn of phrase, and I'm as guilty as just about anyone of overusing metaphor and simile in my own writing. But Love and the Art of War takes it to a whole 'nother level. A hefty percentage of the lines in Love and the Art of War are witty – and, every now and then, perhaps a shade too witty. But the majority made me smile, either with my lips or in my head ("Joe's career at the BBC was still afloat, in a drowning-not-waving sort of way."), so I'm fine with living with the occasional over-reaching clunker.

At the heart of the book is books; I wanted more.

All the more precious to Jane then, when a tiny borrower, having tumbled to the promise of exiting the library with an armful of free picture books, queued between the DVD-toting teens and clucking pensioners.
At such moments, Jane whispered to Chris, 'One more little soul saved from the pixels.'
- ~ - ~ - ~ - ~ - ~ -
Rupert lived in a narrow book-lined house overlooking the heath. John Le Carre once lived nearby. Jane liked to pigeonhole London's nooks and crannies with the delicious knowledge that had she dared, she could knock on a particular author's front door and one of their characters would answer. You could even play the game on nearby Chalcot Square. Knock on Number 3 and Sylvia Plath's ghost peered through the front window. Stroll a few metres southward toward Frederick Forsyth's old digs and bump into the Jackal cleaning his gun in his dressing gown. London was full of authors, the dead ones commemorated by blue plaques for mere civilian readers, but still breathing for a librarian. The whole world around Jane shimmered with invisible dimensions, angles, and parallel realities created by writers.

I would have loved a lot more of that, and of Jane's integration of The Art of War into her life. It was brilliant, and I loved it. I loved the whole first half of the book.

What I didn't particularly want was the terrorism plot that began to gain more and more prominence in the story. It was a shift in the focus of the book that jangled, in discord, against the rest; it was as though a story that started out as a smart and funny and thoughtful rom-com suddenly wanted to be shelved in Action!Adventure! It all came together in the end – an end I didn't entirely expect, but was glad of – but it was rocky there for a little while.

I received a free copy of the book via a LibraryThing giveaway by the publisher/author.

I was surprised bu how good this book was - why was it being given away free when it was really a very well written and engaging story. I really identified with the main character trying to reinvent herself in the face of a dying career (she is a Librarian and the libraries are closing) and a failing marriage. Nicely balanced against what the character learns and uses from her Sun Tzu's 36 Strategems class (which she ends up in inadvertently at the start of the novel). A lot of fun.

Disclaimer: I received a free copy of this book from the publisher/author through the LibraryThing.com Members Giveaway program. I was asked to post an honest review (though not necessarily a favourable one). The opinions expressed are strictly my own.

I admit that I requested this book because the summary was quite catchy and seemed funny. This is not my usual kind of book, I'm a hardcore heroic fantasy fan, but this book has made me set aside, however briefly, my usual irritation at midlife crisis comedy of sentiments.

It balances emotional pain with lightheartedness without being sappy, which is no mean feat, and reads as a dream.
There is quite a great amount of erudition in it, but wonderfully integrated in the plot and the characters are lively and sympathetic.
There is humour (the kind that makes you smirk and giggle by yourself while commuting), pathos, poignant moments and even a bit of nail-biting thrill.

In short, a recommended read.

This is a gem of a novel!

Jane, a librarian with her marriage on the rocks, decides to take a class to help fix her situation. Instead, she by mistake ends up sitting in a class about Sun Zu's The Art of War. At the break, she approaches her teacher to admit the mistake and switch classes but he end up convincing her that he can help her marriage with Sun Zu's 36 stratagems.

Dinah Lee Kung takes the reader along with Jane on her journey to repair her marriage and learn how best to fight your enemy without direct attack. Jane learns a lot about the other people in her life and her class, but mostly about herself.

I loved this book because the character of Jane is so richly developed that I feel like I know her. She is well spoken, well read, and quirky in all the ways a librarian should be. I also enjoyed how Kung did not shy away from incorporating the political current affairs of this age.

The hilarious premise makes for a delightful novel. I didn't expect that to be the case because I've read a lot of, well, tripe lately (plus some amazing gems, so I guess it balances out) but this one really was a delight. The premise is that Jane, a nervous librarian worried about the state of her relationship, signs up for a night class called "Mending Marriages" but is surprised to find out that the class is comprised of only a handful of men, none of whom is wearing a wedding ring. And then the instructor starts talking about Sun Tzu. Turns out the class is actually a management class that uses The Art of War to gives tips for the office (when I mentioned this to my partner Mike he said, "Oh that's very '80's!" but I have it on good authority that he currently uses Sun Tzu's The Art of War to teach chess strategy to his junior high kids). When Jane tries to leave the class, the instructor convinces her to stay because she'll learn more from his class than she ever would from "a class of discarded wives." So begins Jane's attempts to save her marriage using ancient Chinese military tactics. I could see this being made into a quirky movie, a la Shirley Valentine or Fried Green Tomatoes. Well done!

Disclaimer: I received a free copy of this book from the publisher/author through the LibraryThing.com Members Giveaway program. I was asked to post an honest review (though not necessarily a favourable one). The opinions expressed are strictly my own.

Jane is a middle aged London librarian who has a lot of problems: possible job loss, a rebellious teenage daughter, a mother who lives upstairs and a husband who she believes is wanting to leave her. When she decides to go to a women's class to help save her marriage, she ends up in a class with all men called the Art of War. The instructor convinces her to stay in the class and use the 36 Battle Stratagems to save her marriage. After many attempts to use the battle techniques, Jane begins to make progress. As time goes on though, she wonders who exactly is the enemy: her husband, his mistress or Jane herself? I did find this book to be interesting, and funny in places. The 36 chapters,one for each stratagem, did seem to make the book a little long in the middle. I did stick with the book because I did want to see what happened to Jane's marriage.

You have subscribed to alerts for Dinah Lee K&uuml;ng.

You have been added to Dinah Lee K&uuml;ng's favorite list.

You can also sign-up to receive email notifications whenever Dinah Lee K&uuml;ng releases a new book.