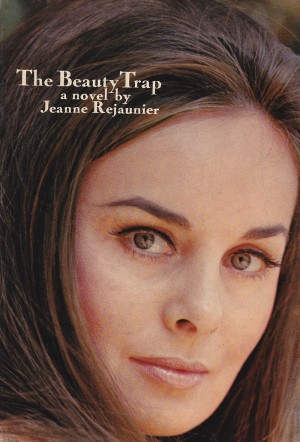 By Jeanne Rejaunier
The Beauty Trap, a revised reissue of the widely publicized international bestseller by Jeanne Rejaunier, tells the inside story of the modeling industry, the beautiful faces, the fabulous bodies and how they are used by their agents, their clients, and their lovers. Rejaunier, a former model herself, strips away the dazzling clothes and false eyelashes to reveal the grime behind the glitter. More
Before there was Mad Men, there was Jeanne Rejaunier’s The Beauty Trap, capturing the same Madison Avenue advertising world of the era, as seen through the eyes of three young models and their agents. Originally published in hardcover by Trident Press, a division of Simon and Schuster, in softcover by PocketBooks, and by Michael Joseph and New English Library in London, Author Rejaunier’s highly acclaimed novel traces the fortunes and misfortunes of Carrie, Dolores and Eve. As glamorous and successful models, they are seen on magazine covers, on runways, in catalogs, on billboards and TV commercials. So beautiful are these young women, they dare to dream of reaching the pinnacle in the fiercely competitive modeling profession. Each does achieve a large measure of success, but not without discovering she must pay a terrible price. For the ambitious model not only works – achingly, endlessly – she also finds herself abused, compromised, and marketed as a commodity. And in the jet set world of fashion shows, openings, discotheques, elegant New York townhouses, boutiques, yachts, and parties graced by international tycoons and Greek billionaires, she is degraded as a mere ornament by pleasure-seeking escorts. As one critic remarked, “The author captures perfectly the bitterness and insincerity of the career model’s round of cocktail parties, power lunches, and bedrooms.”

Jeanne Rejaunier was a model and actress in New York, Hollywood, London, Paris and Rome. She is the author of this sometimes shocking, but always readable novel that exposes the glamorous world of modeling for what it really is - a cynical and ruthless business, artificially sweetened by soulless sex.

Jeanne Rejaunier graduated from Vassar College, Poughkeepsie, NY, and did postgraduate studies at the Sorbonne, Paris, the Universities of Florence and Pisa, Italy, and the Goetheschule, Rome, as well as at UCLA. While at Vassar, she began a career as a professional model, and subsequently became an actress in Manhattan, Hollywood and Europe, appearing on and off Broadway, in films and television, on magazine covers internationally and as a principal in dozens of national commercials.

Rejaunier achieved international success with the publication of her acclaimed first novel, The Beauty Trap, which sold over one million copies and became Simon & Schuster’s fourth best seller of the year, the film rights to which were purchased outright by Avco-Embassy. Rejaunier has publicized her books in national and international tours on three continents in five languages. Her writing has been extolled in feature stories in LIFE, Playboy, Mademoiselle, Seventeen, National Geographic, BusinessWeek, Fashion Weekly, Women’s Wear, W, McCalls, American Homemaker, Parade, Let’s Live, Marie-Claire, Epoca, Tempo, Sogno, Cine-Tipo, The New York Times, the Los Angeles Times, and countless other publications. In addition to The Beauty Trap, Rejaunier also published six other novels: Spies 'R Us, The Motion and the Act, Affair in Rome, Mob Sisters, Odalisque at the Spa, and Everybody's Husband; and nonfiction memoirs My Sundays with Henry Miller and Hollywood Sauna Confidential. Rejaunier's Planes of Heaven spiritual series include seven titles: Planes of the Heavenworld, Everything You Always Wanted to Know About Heaven but Didn't Know Where to Ask, The Kingdom of Heaven and 4th Dimensional Consciousness, The Afterlife in the Here and Now, Living in Eternity Now, The Eightfold Path and the 8th Plane of Heaven, and Here and Hereafter, Forever After. She is also the author of Astrology For Lovers, Modeling From the Ground Up, the Fifty Best Careers in Modeling, Titans of the Muses, The Paris Diet, Runway to Success, The Video Jungle, Astrology and Your Sex Life, Japan’s Hidden Face, The Complete Idiot’s Guide to Food Allergy, and The Complete Idiot’s Guide to Migraines and Other Headaches.

As a filmmaker, Rejaunier directed, produced, filmed and edited the 4 hour documentary, The Spirit of ’56: Meetings with Remarkable Women. Some 200 of her videos are now posted on YouTube:at http://www.youtube.com/my_videos?feature=mhw4; additional writing is available on her blog, www.jarcollect.blogspot.com).

You have subscribed to alerts for Jeanne Rejaunier.

You have been added to Jeanne Rejaunier's favorite list.

You can also sign-up to receive email notifications whenever Jeanne Rejaunier releases a new book.