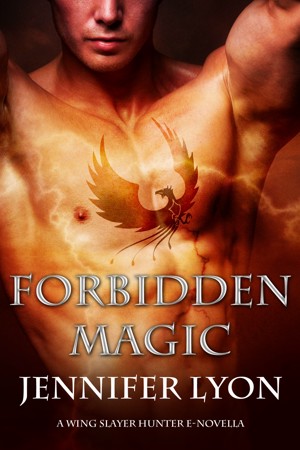 Rated 5.00/5 based on 4 reviews
In Forbidden Magic, Ram Virtos and Ginny Stone discover which is more powerful; the bonds of fate or the choice of love. More
Wing Slayer Hunter, Ram Virtos, must find his soul mirror witch and convince her to mate with him before his Thunderbird tattoo kills him. But while that witch might be able to save Ram’s life, it is the mysterious Ginny Stone who inflames his passion.

Ginny has been deeply fascinated by Ram for months, but dared not act on it or she’d be torn from her mortal life on earth and thrust into her dreaded destiny as a half-breed angel. But when her beloved brother’s soul is at stake, she must do the one thing she both fears and desires…

Jennifer Lyon grew up under the shadow of the Matterhorn at Disneyland in Anaheim, California. She attended Walt Disney elementary school and her very first playmate was her beloved dog, Duke, who was cast in the role of hero in all their adventures.

Clearly Jen was born to daydream. But it took her years to figure out how to turn her imagination into a career as an author. After marrying and becoming a full-time mom to three sons, Jen launched her career with the award-winning Samantha Shaw Mystery Series and other romantic mysteries under the name Jennifer Apodaca. Later, she took the name Jennifer Lyon, combined her love of witches, alpha males and sizzling romance into another award-winning series, the Wing Slayer Hunters.

For more information on Jen or her books, please visit her website www.jenniferlyonbooks.com

Review
Susan Telemaque reviewed on May 6, 2012

As always, Jennifer didn't let us down...the book was awesome, however I was a bit disappointed on a bit of it, BUT when I wrote to Jennifer (email..and YES..she does respond to youas individual) She assured me that my concerns are going to be addressed in future books... After hearing that.... FORBIDDEN MAGIC IS FIVE STARS ALL THE WAY. Thanks Jen for your continued support of my addiction to the wing slayer hunter series... You will continue to receive my support and loyalty to your efforts!!!!

Jennifer Lyon has once again delivered in this 4th installment of her Wing Slayer Hunters series.

Forbidden Magic introduces the story of Ram Virtos and Ginny Stone. Like all Wing Slayer Hunters, Ram struggles against the overwhelming urge for witch blood. The only way to cure the craving is to find his witch soul mirror. Ram found his soul mirror, but she has run away from him. However, Ram doesn't really care as he wants Ginny, sister to fellow Wing Slayer, Eli Stone.

Ginny, also has deep feelings for Ram, but has her own important reasons to not get involved with Ram.

This novella is a wonderful addition to the Wing Slayer series. While perhaps best read as part of the series, it can easily be read as a standalone work.

Warning, if you haven't read Lyon's earlier works, after you read this one you are sure to want to go back and read the earlier works. And, you'll add her to your must read authors!

LOOK OUT!! Lyon Lady is back! And she's kickin' some serious butt with her first indie published Wing Slayer Hunter e-novella. I have been a fan of the Wing Slayer Hunter series since Blood Magic was released back in February of 2009 and I've been hooked ever since. Every book has made me laugh, cry, yell out in frustration and clamor for the next release. I was devastated when I found out that the publisher did not renew the contract to publish more books and I am ecstatic that Jen decided to go the indie route. What would we do without those sexy Wing Slayer Hunters?!

Forbidden Magic is the beginning of Ram Virtos and Ginny Stone's story. Ram is having a hard time. His Thunderbird tattoo is awakening and sending surges of electricity through his body, which will eventually lead to Ram's body spontaneously combusting. The only person that can save him is his soul mirror, who has run away and went into hiding. She wants no part of Ram or becoming anyone's soul mirror. Beside his Thunderbird destroying him, the blood curse is as well. Ram doesn’t care about finding his soul mirror. The one person he wants and cares for, he can't have…..Virginia (Ginny) Stone.

Ginny is the younger sister of the newest Wing Slayer Hunter Eli. They share the same mortal mother, but they have different fathers. While Eli's father was a Hunter like Eli, Ginny's father is a very powerful force and he wants Ginny to follow in his footsteps, whether Ginny wants to or not. He's left her in the mortal realm for now but he plans to take her with him very soon. Ginny hates her father. If she doesn't follow his rules he punishes her and threatens to harm Eli. Ginny would do anything to protect Eli, even give in to her father. That is, until she and Ram finally give in to the feelings they have for each other. Can they find away to beat her father?

I absolutely LOVED this story. Ram is a very dominant alpha male. He is known for impeccable self control, and being very dominant during sex. He never relinquishes his control to anyone. He has become completely smitten with Ginny and is scared of hurting her, so he tries to stay away from her.

Ginny is the perfect heroine. While she's very innocent in ways, she's extremely strong willed and willing to do anything for those she loves. She terrified of her father and feels hopeless that there's no way to stop him from getting his way. Can Ginny and Ram have a HEA while he has a soul mate out there somewhere and her father is planning on taking her away?

I obviously can't give up many details in the story but you will absolutely love it. It is a short read, approximately 10 chapters but it will hold you from beginning to end. I can't wait for the next full length novel to come out. This definitely gave me my fix while I wait for the next book to release.

I am a Wing Slayer Hunter fan girl for life!!

I give Forbidden Magic 5 out of 5 stars

Jen Lyon has done it again. If you have never been introduced to her steamy wing slayer books Forbidden Magic is just a taste of her captivating witches and the couragous men who are the other half of their souls. I have her other books Blood Magic, Soul Magic, and Night Magic. I have been waiting for Ram's story. Thanks Jen for delivering again to a loyal reader the type of story Romance was made for.

You have subscribed to alerts for Jennifer Lyon.

You have been added to Jennifer Lyon's favorite list.

You can also sign-up to receive email notifications whenever Jennifer Lyon releases a new book.