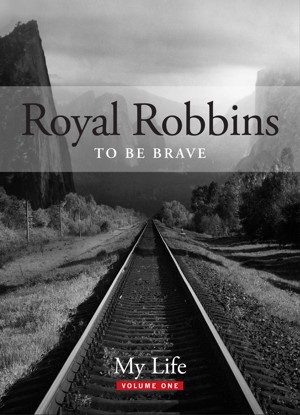 To Be Brave, My Life: Royal Robbins

By Royal Robbins
Royal Robbins' accomplishments as a rock climber are legendary.
This first volume of his autobiography details his historic solo ascent of the Leaning Tower in Yosemite, and chronicles his youth growing up in LA. Robbins' adventurous life story stands as a beacon of inspiration to those who ever pondered how to reach higher by reaching within. He relates climbing in terms everyone can understand.

Royal Robbins’ accomplishments as rock climber and adventurer are legendary. An early advocate of boltless, pitonless clean climbing, he did much to transform the climbing culture to minimize the human impact on the vertical wilderness and protect its natural features.

As a rock-climbing pioneer, he broke through existing standards to create wholly new skill and difficulty levels. In the 50‘s, 60‘s and into the 70‘s, Robbins established one daring new climb after another, among them many revered classics on Yosemite’s Half Dome and El Capitan.

Robbins, a prolific author, has written two seminal books, Basic Rockcraft and Advanced Rockcraft, which showcased his skill and climbing ethic and inspired a whole new generation of climbers. Combined, the two books have sold over 400,000 copies. He is also the subject of a biography, Spirit Of The Age, written by Pat Ament.

You have subscribed to alerts for Royal Robbins.

You have been added to Royal Robbins's favorite list.

You can also sign-up to receive email notifications whenever Royal Robbins releases a new book.