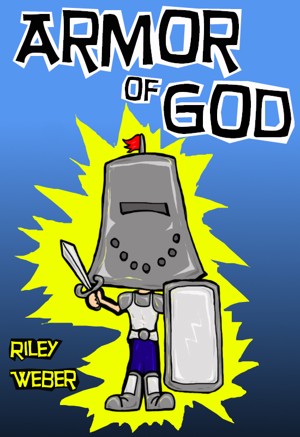 Ephesians chapter 6, verses 10-18, teach us about the importance of putting on the whole armor of God. If we are missing a piece of the armor of God, the Adversary knows it and may try to hit us with his darts or arrows there. Prayer is another important thing we can do to protect us against evil and darkness.

Riley Weber resides in Mesa, Arizona. He has been telling (and making up) stories since he was young. Many moons ago, Riley's favorite topic in grade school was not recess, but creative writing. Recess and lunch came second and third. He loves to write stories of adventures in far (and close) away lands.

His inspiration comes from his two young boys who love all things that have to do with diggers, dinosaurs, sports, cars, and chicken nuggets. His stories are tried and tested on his two little munchkins.

Riley has always had a passion for art and doodling. He draws cartoons on nearly every paper that comes within arms length of his hands. Recently, he has fined tuned some of his art and writing skills by studying painting and fine art at the local community college. He has also taken courses in writing and storytelling, and writes stories and songs in his free time.

Riley has composed and recorded dozens of songs for children which are available worldwide by the character he invented; Nooshi the Balloon Dude. Some of Riley's compositions by Nooshi are top children's Easter, Halloween, and birthday songs.

Just recently Riley has dove into the world of authoring and illustrating ebooks. He has many future books ideas with plans to write and illustrate them himself. If you'd like a sneak peak at Riley's next project or would like to find out what other books he has available, visit his website at www.rileyweberart.com. You can also become friends with Riley on Facebook.

Armor of God - eBook
This book teaches kids to put on the whole armor of God.

Reviews of Armor of God by Riley Weber

You have subscribed to alerts for Riley Weber.

You have been added to Riley Weber's favorite list.

You can also sign-up to receive email notifications whenever Riley Weber releases a new book.