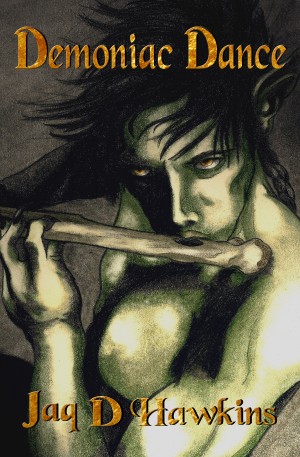 By Jaq D. Hawkins
Rated 4.00/5 based on 2 reviews
A young girl flees her home and an unwanted marriage. Desperation takes her to the riverside, the site where as a toddler she was patted kindly by the goblin who had befriended Count Anton.

Driven by a premonition that she belongs with the people across the river, she soon meets the children of Magicians...and of goblins. More
A young girl is drawn to the world of the magicians, but will she have courage when she encounters their allies... the goblins?

Long ago, in a time forgotten, the ruined city was filled with people and goblins were believed to be only a legend. Now a young girl flees her home in the small settlement south of the river, escaping from an unwanted marriage. Desperation takes her to the riverside, the site where as a toddler she remembers being treated kindly by a goblin who had befriended the human ruler, Count Anton. But another memory of that day unsettles her as she pushes the small boat into the current. A memory of bubbles in the river, and of blood. There's something in the water still.

It is a time of grim omens. Driven by a premonition that she belongs with the northern people across the river, she soon meets the children of Magicians...and of goblins. Yet there are greater challenges to face.

Trouble is brewing, and at the center of the conflict lies tension between species as well as between the ever combative northern and southern humans. Count Anton is caught between those who are eager to assist him and those who have their own agendas. Meanwhile, a new enemy arises from over the sea. Foreign humans come to invade, expecting an easy conquest of the rich lands that Count Anton has so wisely kept productive of food supplies.

The goblins see the danger of this invasion to their own uneasy peace with the familiar local humans, but they disagree among themselves as to whether they will best serve their kind by helping the surface dwellers, or by leaving all humans to kill each other once and for all.

The magic of powerful enchanted weapons belongs to the goblins alone, but a goblin sword gifted to Count Anton might save the humans, conquering all in its path, if Anton can work out how to invoke its power.

Ever vigilant against unseen enemies and unknown conspirators who lurk in the shadows, the children of magicians must survive in a world where goblins dance with dragons in the skies, where monsters and men, friend or foe, might take any form.

About the Series: The Goblin series

A saga spanning three generations in a feudal world governed by magicians several generations after life as humankind knew it is devastated by a planetary pole shift, known to the goblins as the 'turning'.

Dance f the Goblins, Demoniac Dance, Power of the Dance.

Also in Series: The Goblin series

I read this book because - for some reason - I had this one, but not the first in this series. It is about a future Earth in which technology and other advances turned backwards after something called "The Turning". This premise gives the story plausibility problems - because no attempt is really ever made to explain how such an unbelievable thing occurred. There are humans and "goblins" as the major humanoid-like races in this story. The goblins (again for some unexplained reason) seem to be a much more diverse bunch than the humans. This story seems to take shots at major organized religion and to blame a lot of stuff on it. I don't have a problem with this in and of itself. However, the author also seems to be attempting to appropriate deep southern American culture. I can't be absolutely certain that this is the case - but if it is, she was off the mark (this I can say with confidence as a resident of Alabama). The goblins, whom seem to be superior to humans in almost every conceivable way, nonetheless, seem to have an affinity for miscegenation with humans. Again, there is no plausible or believable explanation given as to why the goblins like to dilute their bloodline by copulating with humans. One character in the story says that "breeding is a part of nature", or something to that effect at some point in the story. While this is true - is miscegenation a part of nature? Or is it anti-nature?

This is not a bad book. It has interesting characters and a lot of fun moments. However, I just see too many flaws in areas like logic and plausibility to make this story be great. I will give it 3 stars, say it was worth reading, and I'll leave it at that.

Namah, a young woman from the far side of the river, escapes an arranged marriage on her wedding day. After a harrowing pre-dawn ride in a tipsy boat, she meets wonderful magician friends--one of them Namah's older sister who was also a runaway bride. But trouble threatens Namah's magic-filled life on this side of the river.

Count Anton receives a visit from a bureaucrat bearing the unwelcome news of a neighboring king claiming Anton's lands. An invasion force will soon swarm up the river. Anton's people are farmers and craftsmen, not soldiers. And the reclusive underground goblins refuse to help. After years of hateful actions from Anton's people, the goblins have good reasons for leaving the surface dwellers to their fate.

Without goblin fighters, even Namah and her young women friends must help however they can. These king's soldiers terrify Anton's inexperienced fighters, but when the would-be conquerors draw blood from Anton's long-time goblin friend Haghuf, the escalated war is more than Namah, Count Anton, and their unwelcome visitors could ever imagine.

Coming of age stories are a timeless delight, and Demoniac Dance delivers. Namah is a clever untrained magician, but she struggles with pubescent naïveté. Count Anton is also a complex figure of a practical ruler who, ten years after marrying his Countess Ariane and producing a son, has fooled himself for the duration by saying he does not regret marrying the wrong woman. By the end of Demoniac Dance, we see his actions, thoughts, and heart align.