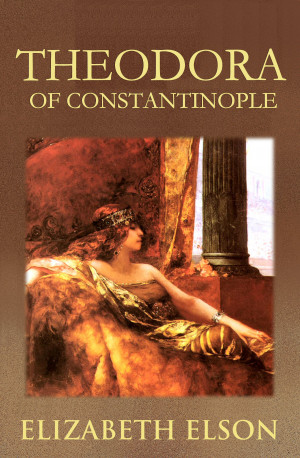 This novel, based on the life of Theodora, is set in the back streets of Constantinople and the vibrant court of Emperor Justinian during the waning days of the Roman Empire. Disgraced after performing a lewd act on the Hippodrome stage, Theodora begins a journey that brings her from the depths of despair to the arms of an emperor, but an ancient law forbids their royal marriage. More
Theodora, a bearkeeper’s daughter, is the Hippodrome’s favorite actress. Tempted by gold, she performs a lewd act on stage before a crowd of excited spectators. Later, humiliated and struggling to gain respect, she accepts a governor’s offer of marriage and accompanies him to his villa in North Africa, lured by promises of sanctuary and status. Disillusioned and desperate, she begins a journey that brings her from the depths of despair to the arms of Emperor Justinian, but her newfound joy is short-lived. This book is the second in a series about women who defined their own lives in the shadow of powerful men. The novel is based on the life of Theodora, a sixth century empress, best known for her part in ending the Nika riots. The novel examines the events that allowed this controversial personality to reach beyond class status, deception, and political maneuvering to create her own unique destiny and carve her place in the history of the Byzantines.
Available ebook formats: epub mobi pdf rtf lrf pdb txt html
First 10% Sample: epub mobi (Kindle) lrf more Online Reader
pdb
Price: $4.99 USD
Buy Add to Library Give as a Gift
How gifting works
Create Widget
Tags: romance history historical palace romance fiction constantinople byzantine hagia sophia empress roman women 6th century
About Elizabeth Elson

Elizabeth is an award winning author whose print books have taken the Bronze Medallion for popular fiction from Florida Book Awards (writing as Joyce Moore)and Best Published Romance at the Florida Writers Conference. She lives in north Alabama and frequently gives writing workshops at conferences and book events.

Reviews of Theodora of Constantinople by Elizabeth Elson

You have subscribed to alerts for Elizabeth Elson.

You have been added to Elizabeth Elson's favorite list.

You can also sign-up to receive email notifications whenever Elizabeth Elson releases a new book.