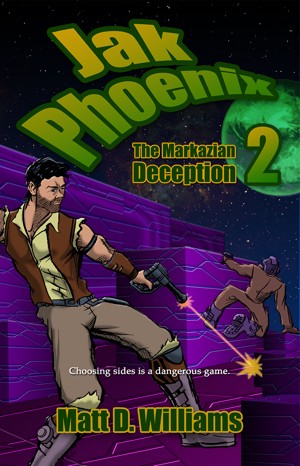 By Matt D. Williams
Rated 4.00/5 based on 2 reviews
Things aren’t always as they seem when Jak finds himself forced to take sides in a dispute he doesn’t fully understand. He quickly finds his choices could jeopardize not only himself, but his friends and countless others.

Friendships will be tested and loyalties will be questioned in the second action packed Jak Phoenix adventure! More
The adventure continues in Jak Phoenix 2!

Destroying a megalomaniac’s dreaded star cruiser was just part of another day for Jak Phoenix. The real trouble comes when it’s time to find steady employment.

The Miraltans simply need a pilot to help them evade trouble with bandits along their shipping routes. While the job doesn’t sound like it’s boiling over with excitement, it may be the easy money Jak and Baxter are looking for.

But, things aren’t always what they seem when Jak finds himself forced to take sides in a dispute he doesn’t fully understand. Never a man to volunteer help easily, Jak is quickly thrown far out of his element and finds his choices could jeopardize not only himself, but his friends and countless others.

Friendships will be tested and loyalties will be questioned in the second action packed Jak Phoenix adventure!

Matt Williams is a Canadian independent author from Welland, Ontario. He is the creator of the Jak Phoenix space adventure series, spawning two full-length novels and a short story with several more books planned for the series.

Growing up, Matt’s main love was the television and movies of the 80’s and 90’s, like Star Wars, Star Trek, Back to the Future, Indiana Jones and countless other TV shows and films. His love of unbridled adventure spills into his novels, where the focus is letting both the reader and the characters have fun together, sharing in the dangerous dilemmas and daring escapes before kicking back for a cold drink.

When he's not writing or working, Matt likes to try to save time for hiking, reading, playing guitar and spending time with his wonderful wife.

Matt is always available to speak about his work. You can find him on Twitter (@mattwilliams79) on Facebook (www.facebook.com/mattdwilliamsauthor) and on his website at www.mattdwilliamsonline.com. Drop by anytime.

He quickly uncovers that the people in charge of Miralto are gutting the resources of Markazia, enslaving its inhabitants, and lying to the Miralto public about all of it. Guerrilla rebels are constantly attacking the system, and Jak soon falls for their gutsy and attractive female leader Karina. Although some people might dislike how unbelievably stupid Jak is with the rebel leader, this was actually one of my favorite aspects of the novel. Stupid is Jak's specialty, and he quickly performs several dangerous favors for the rebellion and alienates his best friend Baxter. My husband also read Jak Phoenix 2 and he summed up Jak's motivation as "anything to get in the panties." I found Jak's behavior very endearing because it was so genuine. People do blockheaded things because of pesky physical attractions all the time. Someone is doing it right now.

Overall, Jak Phoenix 2 is an emotionally driven action-packed adventure. Jak is tested hard by his falling out with Baxter, and he suffers some very bad consequences for his spring break attitude with the rebel leader.

The novel was tightly plotted and the characters were vivid and believable. Compared to the first novel, I am forced to say that it was not as laugh out loud funny. It still was humorous but the story was anchored more by its serious aspects than a desire to be funny.

Jak Phoenix 2 is an exciting read that diverted me from the cares of my life. There is always something going on: explosions, fist fights, crashes, and high speed chases. Jak sorely regrets his foray into gainful employment, and I suspect that he will be gratefully pursuing freelance salvage work in his next adventure.

Jak Phoenix is such an awesome character that I couldn't wait to dive into another adventure with him. Williams does an excellent job of recapturing the magic that made the first book so good and carries it to a new level. From the very first page, it feels like getting back together with old friends.

Jak keeps to his usual antics with Baxter trying to reel him in. Of course, it doesn't take long for Jak to find trouble and takes you along for the ride. That is where the real fun begins. Watching him squirm out of a desperate situation and into another never gets old.

The only gripe I have is that in the beginning Jak gets conveniently released from his decisions at the end of the first book. In typical fashion, Williams essentially resets him so he can go off to do his thing. The rest of this book is too good to let this detail ruin an overall great reading experience, though.

After all the twists and turns, I found this to be another very enjoyable read that all scifi fans should check out. I look forward to more fun from this author.

You have subscribed to alerts for Matt D. Williams.

You have been added to Matt D. Williams's favorite list.

You can also sign-up to receive email notifications whenever Matt D. Williams releases a new book.