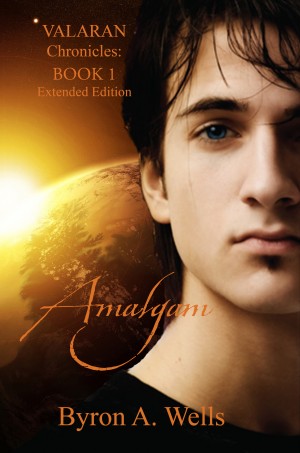 By Byron A. Wells
Rated 5.00/5 based on 2 reviews
The First Volume in the Valaran Chronicles is your launch into an epic adventure.

Follow Hobs as he is befriend by an ancient intelligence and together they must defend his home and friends against an ruthless enemy.

The book is 13+ More
The First Volume in the Valaran Chronicles is your launch into an epic adventure.

After a tragic accident, Hobs’ quiet life is changed forever. His body repaired, he is befriended by Archon, a relic of the long-lost Valaran Empire. As the result of his friendship, Hobs discovers his Valaran heritage and learns of a serious threat from an old enemy, the Scarian — a vicious reptilian species responsible for the genocide of the Valaran Empire.

In order to protect himself, his town and planet from this ancient enemy Hobs must challenge everything he holds to be true — embrace new knowledge and skills; and together with Archon, they must find a way to defeat the Scarian incursion and restore peace on this remote side of the galaxy.

Aspiring SciFi and Fantasy writer, IT professional by day.

This truly was an astonishing and vivid fantasy written by Byron A. Wells. I did read Parem first and I highly recommend that you read the Prequel to this story, it adds much enlightenment. In Amalgam there really is 3 different story lines coming to an extraordinary conclusion where all three stories merge.

Hobs is a young man how is very different from all the other villagers, he has dark hair and unusual eyes. He was raised by Ren because his parents were killed by a plague, a plague that also killed Ren’s child. Hobs is brutally attacked and left for dead, he wakes up in an underground facility that is like nothing he’s ever dreamed of.

Villagers search for Hobs, but the local bullies that have tormented Hobs for his differences decide to turn their attentions to Ren, Hobs’ adopted father. Their attack is atrocious and Ren meets a similar fate to Hobs. A villager and close female friend is also viciously attacked and drives Hobs towards his revenge filled goal.

In the underground facility, Hobs is transformed into a cybergenic organism. There is data transfers and neuro plug in type equipment embedded in Hobs.

While this is happening, the aliens that almost caused a planetary genocide return. A mysterious Valaran who survived the “cleansing in the inter-galactic war comes back into play.

This may seem like an extremely complicated plot but Mr. Wells have weaved his web and sucks you right into this world of his creating. Because it is so vividly written some of the scenes are very graphic and may not be suitable for the younger readers. Although this is a sci-fi story it was still a very easy and enjoyable read. I found Amalgam to be a sci-fi, older young adult, fantasy that I really adored. 5 Stars

This copy of Amalgam was given to me by Goodreads Making Connections Group and Byron A. Wells in exchange for an honest review.

(reviewed 22 days after purchase)
Michael Griffith reviewed on May 15, 2012

This book is 4.75, but I still would consider this a must read for Sci-Fi fans. I can't remember if it is posted in the synopsis so I will say it here, Do not read this book if you are not comfortable with adult scenes. With that said the scene is done as well as it could be considering. But for my review, I really enjoyed this book. I felt that the changing of perspectives worked very well to give the reader a total view of what was going on. The author provided enough information to allow the reader to follow the series of events and provide adequate back story, but did not put so much detail and information that the book became tedious at an point. There was an adequate amount of action scenes to progress the story and keep the reader interested. There were some story lines that were brought up that were not concluded that I felt could have been wrapped up easily but those were not critical so the author may be giving the reader the ability to put in his or her own ending to that plot line. I did feel that the book was short, but considering all that is involved in this story I think the length is perfect.

Now for the Sci-Fi aspect of the story. This is a very good Sci-Fi story that contains alien races, androids, and AI. Wells works all of these elements into a contrast with pre-industrial society of Redwall. I also liked that Wells allowed the advanced elements to be decaying and to allow them to have a weakness that is not seen in many Sci-Fi stories.

My favorite Character is definitely Hobs. There are many reasons for that but the main is that I find that I want to be in his shoes, even though he has faced tragedy and hardship but he does make the most of what he has been given, granted he does have some secrets that allow him to do more than most other people would have been able to do. I also find that I root for Lena, and I understand why her story ended the way it did but I would have still liked it to have ended the way it appeared it would at the beginning of the book.

I found that I instantly hated Roland and all that he represented. I think the author makes it easy to hate him, but that may just be because of my concepts of proper behavior. Other people may feel that Roland was in the right for what he did, and I will understand their views but I think that most people would side with me in that Roland received his just deserts. Also I felt that I severely disliked Pol, mainly because of his attitude toward the other characters, not because of his defense of some of his son's actions. I cannot fault a father for wanting to protect his son, but I do feel that there was not much that he could have done to influence his son, but there are some things. Most of those deal with Pol's own ambition and his elitist attitude that was passed onto his son.

So I really liked the novel and I highly recommend it for any Sci-Fi reader. I cannot wait for the next book in the series and I can't wait to see what Hobs gets into.

You have subscribed to alerts for Byron A. Wells.

You have been added to Byron A. Wells's favorite list.

You can also sign-up to receive email notifications whenever Byron A. Wells releases a new book.