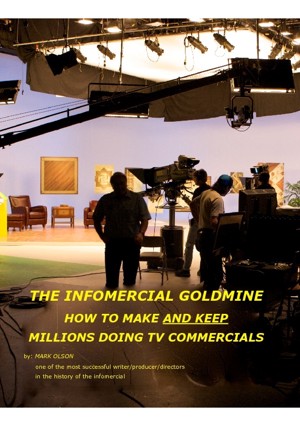 The Infomercial Goldmine, How To Make And Keep Millions Doing TV Commercials

By Mark Olson
Rated 5.00/5 based on 2 reviews
Finally, a step-by-step guide packed with everything you'll need to find out if direct response tv ads are right for you, your ideas, your product. You'll learn to evaluate a product, both new and existing, how to separate real drtv producers from "talkers" and you'll learn how to make a deal that works, so you become rich along with your partners. A must have road-map to success and wealth.

Mark Olson is an award-winning writer, producer and director of direct-response television commercials, including 60,90 and 120 second "spots" and half-hour infomercials. When he's involved in a project from the beginning, he has an unparalleled success rate exceeding 90%.
His clients include: The Fantom Vacuum (the first Dyson designed vacuum), Simmon's Air Comfort Beds, Alexis Vogel Cosmetics, Taebo and Orange Glo International with their flagship product, Oxi Clean and most recently the #1 ranked, 2 minute spot in the country, "Smooth Away", a depilatory and exfoliation product.

An absolutely fantastic book! Mark gives you an inside honest look at this industry. I love his style…no nonsense and to the point with tons of insider information that I don’t think you can get anywhere. I would not do a thing with an idea that I have without completely devouring this book first….This book, quite frankly, could save your financial life.

A no nonsense, direct and superbly informative look at the business of infomercials. The brilliant aspect of this book is the author's overriding desire to keep the aspiring marketeer from getting burned. I've worked in drtv for years, and have seen many projects succeed, however many more that have failed. This book WOULD HAVE RESCUED some of those projects that went down in flames. And it could have SAVED MILLIONS for those whose naivete was their downfall. A MUST read if you want to get into the world of direct response.

(reviewed the day of purchase)
Linda Buzzalini reviewed on April 25, 2009
(no rating)
This was very fun for me to read as Mark and I and two others were partners in the infomercial world and worked together for 6 years. On a personal level, not only is Mark very creative, funny and talented, what he outlines in this book is certifiably true. So many people watching TV think "Gee I bet I could make a MILLION $$, maybe even a TRILLION, on TV selling ____; if only I knew where to start!" Well, that would be right here, with reading this book. It's a high risk industry; millions of $$ have been lost. But millions of $$ have been made, too; and it might be YOU! Good luck; have fun!

(reviewed 3 days after purchase)
Squire Fridell reviewed on April 21, 2009
(no rating)
Mark Olson is an anomaly in the world of infomercial advertising. He's as knowledgeable as anyone in the business, he does what he says he's going to do, and he's honest! Any ONE of these three traits in the business is uncommon...to possess all THREE in one individual is most rare.
His ebook "The Infomercial Goldmine" is a MUST-READ for every actor, director, producer & wannabe in the business. Why re-invent the wheel when Mark already did it for you? This is a six star read in a five star world!
Squire Fridell
Author:
ACTING IN TELEVISION COMMERCIALS
Random House, 4th Edition released March, 2009

(reviewed the day of purchase)
James Karpeichik reviewed on April 20, 2009
(no rating)
"The Infomercial Goldmine” by Mark Olsen is a must read for anyone contemplating or doing business in Direct Response TV. This fast and informative read is full of valuable advice and insight into marketing on television. Anyone serious about successfully selling on TV should make this book a required first step.

In business school we always learned to follow the data and in the business of DRTV, the successful numbers lead to Mark Olsen. His word on the subject is gospel and now he shares his expertise chapter and verse for everyone ready to listen and benefit.

You have subscribed to alerts for Mark Olson.

You have been added to Mark Olson's favorite list.

You can also sign-up to receive email notifications whenever Mark Olson releases a new book.