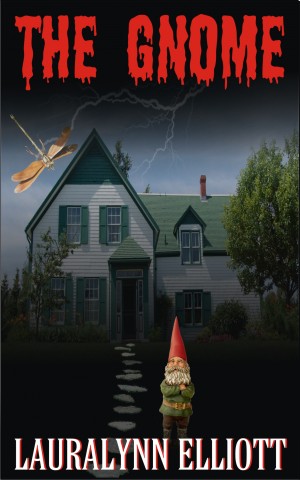 This is a long novella of approximately 39,660 words.

The Gnome by Lauralynn Elliott
Tara Reed is rather surprised to find out that she has inherited her grandmother’s house. Being she was always the woman’s least favorite grandchild. Along with the house she has also inherited a host of creepy looking lawn ornaments. At least living in Road’s End does lead her to the handsome sheriff.

Sheriff Jake Tyler is starting to wonder about the beautiful woman who is new to town. She seems a bit paranoid. But then again, he can never forget the 911 call from her grandmother. Maybe Tara has a good reason to be paranoid.

Wow! I loved this book even while pulling up my big girl panties and peeping through my hands while reading. Okay, so I couldn’t cover my eyes and read, but if this was a movie, I definitely would have been doing that. The author has written a fabulous horror story that includes some humor and a touch of romance. All I can add to this review is that I won’t be buying any lawn ornaments in the near future.
http://justjudysjumbles.blogspot.com/2013/12/lauralynn-elliott-book-list.html

Tara Reed moves to the small town of Road's End after she inherits her Grandmother's house. As an artist, she sees what changes the house decor needs immediately. However, most of the changes she wants to make are in the garden. The array of tacky garden ornaments will definitely be going. Especially the hideous garden gnome. The creepy feeling she gets from the cement figure is only the beginning of a weird day. Tara heads to the local diner and introduces herself to the waitress. She knows something is up when the waitress's demeanor instantly changes, but puts it to the back of her mind when the handsome Sheriff, Jacob Tyler, helps with her temperamental car.

Jake Tyler is very much attracted to the newest resident in town. But having been burnt before he wants to take things slowly with Tara. A difficult task when she calls him most days to report local kids trying to spook her. He teases Tara about it but things take an ugly turn when her friends visit for a weekend. And it has nothing to do with the fact that her ex is among the group.

The Gnome is a very well written book that keeps the reader guessing throughout. It's creepy, full of suspense, has very descriptive and vivid scenes and I'm delighted I don't have garden ornaments! All in all, a very enjoyable read.

I really enjoy this horror novel. It starts out with Tara Reed inheriting her grandmother's house, and on the first day she moves in, the sheriff, Jake Tyler, warns her that even though her grandmother was reported as dying from a heart attack, she had made a call to 911 saying "something" was after her. This sets the stage for what happens in the rest of the book. At first, Tara notices small things, like strange noises and the lawm gnome shifting positions. She assumes it's a prank by some local kids having fun, but she's soon to find out it's far more sinister than that. When her friends come for a visit, they find themselves in a horrifying struggle for survival.

I won't spoil the book, but I will say I enjoyed not being able to tell what would happen next. I'd think the story was going to go in one direction, but it would veer off in another. I really liked the twist at the end on how the human sacrifice was resolved. It wasn't what I expected, and I thought it was a clever way to resolve things. Plus, it had a very sweet romantic subplot, so if you like some horror and mystery with a dose of romance, you might enjoy this book.