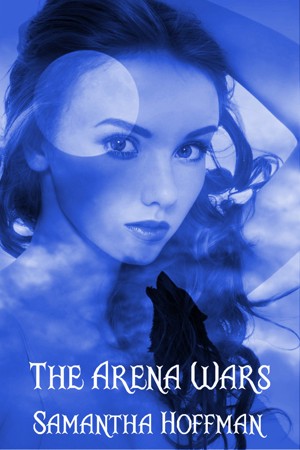 The Arena Wars is a brutal fight to the death with your bare hands that takes place in a reconstructed gladiator-style arena. The fights are headed by Elias, a nine hundred year old vampire. Partners fight to the death with no weapons and no rules. If you refuse to fight, you’re killed on the spot. If you lose a fight, you die. Elias takes a special interest in Alanna, especially in her blood. This leads Alanna to believe that she’s meant to be his soul mate. Can Quinten convince her otherwise?
Available ebook formats: epub mobi pdf lrf pdb txt html
Price: $0.99 USD
Buy Add to Library Give as a Gift
How gifting works
Create Widget
Tags: romance vampire action werewolf
About Samantha Hoffman

About the Series: Arena Wars

Shape-shifting werewolves, blood-drinking vampires, family drama, deadly fights, and daring rescues. After getting on the wrong side of the most powerful werewolf in their world, Alanna Moore—a young werewolf with strong family ties and an even stronger desire to keep her loved ones safe—is kidnapped and shipped off to the Arena, a place of murder with no hope to keep its occupants going. Fighting to the death by her side is her closest friend, Quinten—the blind human hopelessly in love with her.

Their forbidden relationship triggers a chain of events that sets their entire world on its head, and the couple are forced to go on the run, fighting dangerous werewolves and vampires along the way. They begin gathering a ragtag group of allies as war breaks out between Alanna’s family and the powerful werewolf she angered. In the fight of their lives, nobody is safe from harm, and Alanna may end up losing everything she holds dear.

Reviews of The Arena Wars (Arena Wars #1) by Samantha Hoffman

What I liked:
-The main character. Alanna is strong and she cares deeply for her family and her best friend, Quinten. She has anger issues sometimes and can make rash, stupid decisions, but she felt real and believable.
-The best friend. Quinten wasn’t your typical borderline abusive love interest. He was completely blind and he was insecure about his disability, but he felt real, and you could tell he cared about Alanna. He and Alanna’s relationship was not a case of insta-love; it was fleshed out and meaningful.
-The action scenes. They were very well written. My favorite thing about this author is her ability to write great action scenes that can be intricate without being confusing.
-The secondary characters. Alanna’s father Ray and her cousin Jax were both loving, caring men that were major players in the game. Unlike many Young Adult books, Alanna’s father played a huge role in her life, and he wasn’t just there for an occasional page or two.
-The Arena. The fights were gruesome and heart-breaking, and the author did a wonderful job of portraying all the emotions Alanna went through.
-The ending. I never saw it coming. Honestly, the last two chapters and the epilogue were amazing. There was so much raw emotion and action I couldn’t put it down.

What I disliked:
-Alanna had a couple of stupid moments that left me shaking my head, but they weren’t too bad because she was under a lot of pressure, she had no other options, and she thought she was doing the right thing and saving someone she loved. Plus, Quinten pointed them out to her and she agreed with him. She knew she was being stupid.
-The Arena. Partners were forced to fight to the death for the entertainment of others, which was kind of similar to The Hunger Games, but it was a minor similarity that was easy to overlook.
-The villains. There are two major villains in this book, and I felt like they could have been given more detail and maybe some back-story. But I know this is only the first book in the series, and we could learn more about them later.

This book was super cool. A book with vampires and werewolves can sometimes be kind of a Twilight copycat, but I really felt like this book was really different. I loved the characters, especially Quinten and Ray, and I felt like they were all one big dedicated family. There was intense action that was described so well I felt like I was watching the fights in person, and there was a relationship that grew over time and turned out to be true love. This book has it all. Drama, action, romance, suspense, and mystery.

I loved this book. The only "issue" I had was since when is 22 years old a boy? I just loved it

I loved the book and the characters. It kept you on your feet, fast paced and a book that you can't put down.

This book was excellent. I can't wait for a sequel. Nice twists, great characters. Very fast read because I couldn't put it down.