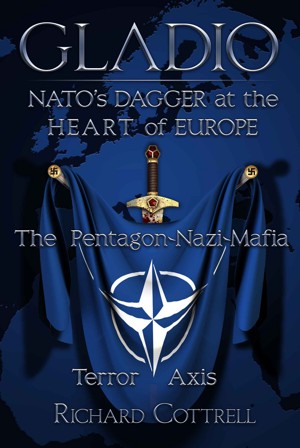 GLADIO - NATO’S Dagger at the Heart of Europe: The Pentagon-Nazi-Mafia Terror Axis

By Richard Cottrell
Masquerading as a rear guard against a Communist takeover, NATO's covert special forces are in reality a hideous cancer poisoning European democracy. NATO was behind the Red Brigades and RAF; the murders and attempts on the lives of heads of state: Aldo Moro, Robert Maxwell, Olaf Palme, Pope John Paul II, and JFK; and the false-flag train bombings in London, Madrid and Bologna. More
The attack on Libya laid bare the iron fist within the velvet glove of slogans such as “humanitarian intervention." Like the destruction of Yugoslavia and the rape of Afghanistan, the reduction of Libya to a virtual slave colony was performed under the banner of NATO. And what exactly is NATO? Richard Cottrell tells the story of mayhem and murder behind the “alliance for peace" and predicts an emerging military colossus fighting to seize control of strategic resources such as oil, gas, minerals and water anywhere on the planet.
Conceived as rear guard stay-behind operations to frustrate a Soviet invasion, NATO’s covert special forces warped into instruments of psychological and physical terror. This was the 'strategy of tension' intended to manufacture a state of fear, driving electors to safe Right-wing governments. Thus followed the 'years of lead' in which hundreds of innocents perished and many more were injured in a synthetic war fought in the streets and public squares of Europe. Gladio architect and NATO commander General Lyman Lemnitzer was implicated in constant efforts to kill stubborn French president Charles de Gaulle, which led to NATO's eviction from France. The Pentagon C-in-C sacked by JFK for rank subordination duly reaped his personal revenge on the president in Dallas. On Lemnitzer's watch the secret armies forged bonds with organized crime and dedicated neo-fascists. The destruction of Bologna railway station on a busy summer day in 1980 was a classic false flag atrocity. A NATO-backed military junta pushed aside the elected government of Greece. The island of Cyprus was subjected to partition and genocide. According to Gladio manuals of terror devised by French master terrorist Yves Guérin-Sérac, urban guerrillas like the Red Brigades, the Baader-Meinhof Gang and the November 17 guerrillas in Greece were penetrated and manipulated. Turkey suffered two sponsored Gladio coups. Premier Adnan Menderes was hanged after that of 1960. The second in 1980 installed Gladio's Turkish commander General Kenan Evren as military dictator. Italy found itself with a powerful alternative deep state government, the ultra-secret P2 pseudo-Masonic lodge founded by acolytes of Benito Mussolini. The Vatican banking scandals led to the bizarre ritual murder in London of leading P2 member Roberto Calvi. Swedish PM Olof Palme was assassinated. Seventeen years later his pupil and premier-in-waiting Anna Lindh met the same fate. Italian ex-PM Aldo Moro, eager for compromise with the communists, was kidnapped and murdered. An attack was staged on Pope John Paul II by Turkish neo-fascist gangsters with regular work as Gladio guns for hire.
Cottrell describes Gladio in the evolutionary stage two of the Strategy of Tension, the communist bogey replaced by Islamic terror and anti-globalists. The exposure of Ergenekon, a Gladio copy-cat deep state conspiracy brought to light in Turkey in 2009 led to mass arrests across the country by in the incumbent soft Islamic government. The massacre of innocents in Norway in Norway in July 2011 and shootings in Belgium, France and Italy all bore the signs of classic Gladio false flag ops.

Richard Cottrell enjoyed a long career in the British print and broadcast media. As a television journalist specializing in politics and economics he contributed regularly to the national ITV network. In 1979 he was elected as a Conservative in the first direct elections to the European Parliament. Over the next ten years he sat on the parliament’s important committees and published two books, one a polemical attack on the EU’s farming policy (The Sacred Cow) and another (Blood on Their Hands) which extended the inquiry he performed on behalf of the parliament into the murder of British journalist Ann Chapman under the military junta in Greece. His inquiry cleared an innocent man. He also stumbled on the existence of the Greek Gladio outfit.
He wrote the highly praised landmark Cottrell Report into the activities of pseudo religious cults such as the Moonies and their harmful influences on families and society.

You have subscribed to alerts for Richard Cottrell.

You have been added to Richard Cottrell's favorite list.

You can also sign-up to receive email notifications whenever Richard Cottrell releases a new book.