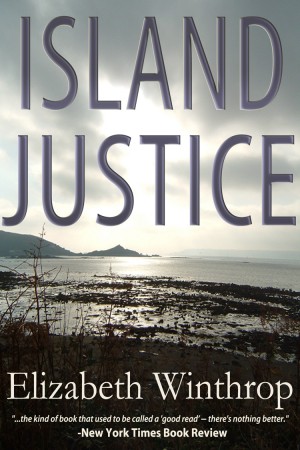 A compelling psychological thriller set in an isolated island community where one woman struggles to trust the pulls of her heart while forcing the islanders to face their collective conscience and the true meaning of justice. A beautifully observed novel in the tradition of Anne Tyler and Alice Hoffman, selected by People Magazine, Cosmopolitan and Good Housekeeping as a great beach read. More
“Evocative… richly drawn characters…suspenseful storytelling.” People Magazine Beach Read of the Week

All her life, Maggie Hammond has been running--from her family, from the men who want to tie her down, from the fear of having to depend on anybody but herself. For Maggie, home means her beloved godmother, Nan. Then word comes that Nan has died and has willed Maggie her seaside Victorian house. When Maggie lands on the island one October day, she is intending to stay a few weeks. But soon after she arrives, she makes a gruesome discovery on the beach that catapults her into the middle of the year-round island community and its strange cast of characters.
A beautifully observed novel in the tradition of Anne Tyler and Alice Hoffman, Island Justice sets an independent woman's struggle to trust the pulls of her heart against the backdrop of an isolated island community which must come to terms with its collective conscience and the true meaning of justice.

ELIZABETH WINTHROP (www.elizabethwinthrop.com), the author of over sixty works of fiction for all ages, was born in Washington, D.C. Her award-winning titles for children include The Castle in the Attic, Counting on Grace, The Red-Hot Rattoons and Dumpy La Rue. Her short story, The Golden Darters, was a selected by BEST AMERICAN SHORT STORIES by Robert Stone. Under the name Elizabeth Winthrop Alsop, she is the author of the memoir piece, Don't Knock Unless You're Bleeding; Growing Up in Cold War Washington. She is currently working on a personal history about her parents' love affair during World War II. The daughter of Stewart Alsop, the political journalist, she divides her time between New York City and the Berkshires. For more information, www.elizabethwinthrop.com

You have subscribed to alerts for Elizabeth Winthrop.

You have been added to Elizabeth Winthrop's favorite list.

You can also sign-up to receive email notifications whenever Elizabeth Winthrop releases a new book.