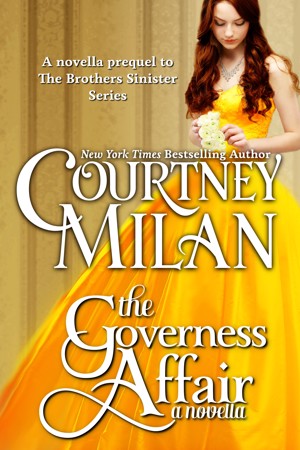 By Courtney Milan
Rated 3.50/5 based on 8 reviews
Three months ago, governess Serena Barton was sacked, and now she's demanding compensation from the man responsible: a petty, selfish duke. But it's not the duke she fears. Hugo Marshall handles all the duke's dirty business, and he's been ordered to get rid of her by fair means or foul. Now if only Hugo didn't find her so compelling... More
A new series from New York Times bestselling author Courtney Milan...

She will not give up.

Three months ago, governess Serena Barton was let go from her position. Unable to find new work, she's demanding compensation from the man who got her sacked: a petty, selfish, swinish duke. But it's not the duke she fears. It's his merciless man of business--the man known as the Wolf of Clermont. The formidable former pugilist has a black reputation for handling all the duke's dirty business, and when the duke turns her case over to him, she doesn't stand a chance. But she can't stop trying--not with her entire future at stake.

He cannot give in.

Hugo Marshall is a man of ruthless ambition--a characteristic that has served him well, elevating the coal miner's son to the right hand man of a duke. When his employer orders him to get rid of the pestering governess by fair means or foul, it's just another day at the office. Unfortunately, fair means don't work on Serena, and as he comes to know her, he discovers that he can't bear to use foul ones. But everything he has worked for depends upon seeing her gone. He'll have to choose between the life that he needs, and the woman he is coming to love...

Also in Series: The Brothers Sinister

Reviews of The Governess Affair by Courtney Milan

I was surprised that I liked this book. From the reviews and the the description I was not expecting much but it delivered. The matching of wits was funny and the circumstances although not a laughing matter did not define either character. Two kindred spirits of practicality and ambition, Hugo and Serena were perfect for each other. Yes she was raped and other than her wish to secure a future for her child Serena does not seem the sort to dwell. A complete opposite of her sister. Ironically the lesson here to me is that we all determine or should determine our fate. We may not be able to control all circumstances but our reaction and our actions should be well-planned. Both of these characters tried to control their fate, Hugo even controlled the Duke's fate for a time. They deserved a happy ending.

got to download from Amazon. It started of wonderful but then it got just ridiculous. I am developing this hate for novellas now. This could have been so much more. It was all over the place for me. I wish the book was paced nicely. It just seems make so agitated that this woman has been raped and is three months pregnant yet already falling in love and allowing another man to kiss her. I wished there had been this long gap before she is wanting to make love to Hugo. The book started out strong and good but started to fall flat and just a distasteful because of the situation at hand. She is a rape victim that is only three months pregnant from the result of this not that long ago attack. I get that this is a novella but not enough where I can rave to all my book nerd friends and have has searching out for more books by the writer.

It’s been a while since I’ve read historical romances. They’re my first love, but they also tend to annoy me because women generally are portrayed as weak. It’s refreshing to read a story where the woman is clear-headed, knows what she wants, and goes after it.

Serena’s been through quite a bit—and it ended in scandal. She has let go (a polite way of saying “fired”) but now she has more to fight for than she ever imagined.

And then there’s Hugo Marshall: A man whose reputation names him as the ruthless Wolf of Clermont. He’s ruthless because he has to in order to get to where he wants to go, but then he meets Serena and finds that he doesn’t want to be ruthless as much as he wants her.

I loved Serena and Hugo. They fought their attraction for separate reasons, but it wasn’t annoying or frustrating when they did. They both had reasons and the “fighting the attraction” part of the story wasn’t drawn out. When Hugo clearly told Serena that he felt the attraction as well, I was elated because rarely do you find a man be as blunt as he in these novels. But don’t take that the wrong way—he was so kind and patient with Serena, and knew how to treat her in just the right way.

And Serena? She’s fantastic to read about. She’s strong and fighting to get past what happened to her. She won’t take no for an answer and won’t stop to get the recognition she deserves. But when she meets Hugo, well… things don’t go according to plan. Nonetheless, “things” get solved in a way different than expected (which had me clapping at Hugo and Serena—go them!) and end in a very satisfying way.

This is a novella, yes, but it doesn’t seem too short or rushed in any way. I really enjoyed reading about Serena and Hugo (though I wish Serena’s sister would get a happy ending!).

And the epilogue was a nice way to get me hooked onto the rest of the series. Though there are no cliffhangers—thank God—it definitely left me wanting to read more of The Brothers Sinister and what the rest of the characters will get up to. I definitely recommend this book to those who want romance, strong women, jerks who get what’s coming to them, and a happily ever after.

I liked the story.

Enjoyed it thoroughly and look forward to the next in the series ;>

Good, but not great, book.

Wonderful start of a new series!