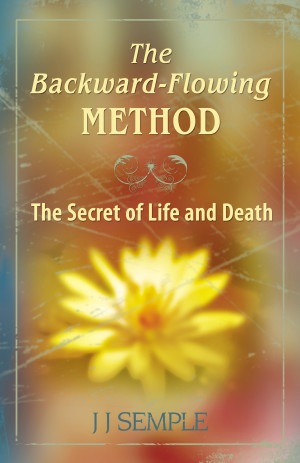 The Backward-Flowing Method: The Secret of Life and Death

By JJ Semple
What is The Backward-Flowing Method? The short answer is The Secret of Life and Death. The long answer is a safe, permanent way of awakening Kundalini. Once Kundalini is awakened, it uses the nervous system as a communication network, first to diagnose, and second, to flood affected areas with vital Life Force energy. Over time, the affected body area is restored to full functionality. More
The backward-flowing method is a process with a beginning, a middle, and an end. And like any process, it has to proceed step-by-step in proper order, like a scientific experiment. The first step is to reverse the breath. Reversing the breath triggers step two: drawing the distilled seminal fluid up the correct channel in the spine. It ensures that the process will unfold correctly, without harming or frightening the practitioner.

When you detect the sensation of movement in the lower belly as you breathe (after practicing Golden Flower Meditation for 100 days), you are ready to initiate the backward-flowing method.

What is it that moves? Whatever its composition, it has the properties of movement and direction. You will perceive it as a sensation, something you can feel, but not actually touch, hear, or see. This sensation may be perceived differently by individual practitioners. That's the reason it's difficult to express with everyday language. I perceived it as a current of air in the lower belly, but now I'm convinced after many years of reflection and years of listening to various accounts, that it is not air or breath, but an etherized or distilled form of sexual energy. Where does this energy come from? Is it breath? Is it energy? Is it breath energy? It's the result of the Diaphragmatic Deep Breathing, the catalyst of the sublimation process — the fact that you are starting to harness your energies instead of wasting them.

JJ Semple has worked as a film editor for NBC with TV producers Stuart Schulberg and Ted Yates, and he edited “Assassin,” an independent feature film, for Rod Bradley's Streetlight Productions.

In the 1970s and 80s he lived in France, where he directed his own training school, Arazon, a company that prepared managers for negotiation and problem solving. After attending a French business school, he established a subsidiary of UNILOG, a leading French software company, in the US. He returned to Paris to work for Apple Computer Europe, designing multimedia programs. He also taught a multimedia course at the American University in Paris. It was during this period that he began writing feature screenplays.

His screenplay, “Everyone Wants to Make Movies” (co-written with Mark Richardson) won the Telluride award in 1997, and their screenplay “Little Dan” won first place at the Telluride Independent Film Festival in 2000.

Semple's formal education includes studying English Literature at the University of Pennsylvania and George Washington University, and a master’s degree in marketing from Hauts Etudes de Commerce in Paris.

His personal education involves yogic practices and spiritual exploration, inspired by a wide variety of teachers, writers and philosophers, including Gopi Krishna, Milarepa, and Lao Tse. However, his worldly accomplishments pale beside his thirty years of investigating workable methods for activating the Kundalini~Life Force. JJ Semple is one of the foremost authorities on the practice and application of Kundalini~Life Force Science.

About the Series: Golden Flower Meditation

The two books in this series are related. You can tell by their covers; they use the same motif. Kissin' cousins? More like blood brothers, in more ways than one: They cover the twin aspects of kundalini: theory and praxis.

"The Secret of the Golden Flower: A Kundalini Meditation Method" is that sequel, a much anticipated companion guide to the SGF as well as a follow-up to his autobiographical kundalini memoir.

Review
david oneal reviewed on Feb. 18, 2010
(no rating)
well organized materials..and the author was right on target with this book..i have practiced a related method for a number of approaching 30 years..but without this addition..i began feeling inner movement and changes within a couple days..if you meditate, this books approach is an excellent addition to your practice..

You have subscribed to alerts for JJ Semple.

You have been added to JJ Semple's favorite list.

You can also sign-up to receive email notifications whenever JJ Semple releases a new book.