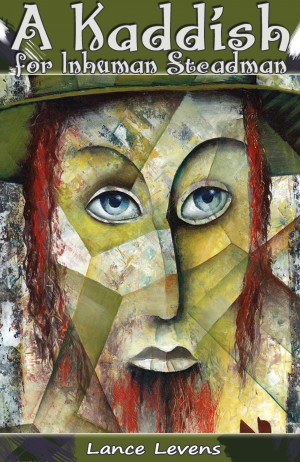 A Kaddish for Inhuman Steadman

Rated 5.00/5 based on 2 reviews
Four male teens fall to their knees in front of an altar—of breasts. A breast cult? Pop art? Smart-alecs and idiots clash and hash out the consequences in Last Step GA and when mammalian fantasies enslave the four boys, an orthodox Jew, the only orthodox Jew in Last Step, reminds them that the flesh is never the final measure of love.
Available ebook formats: epub mobi pdf rtf lrf pdb txt html
First 5% Sample: mobi (Kindle) lrf pdb Online Reader
Price: $3.99 USD
Buy Add to Library Give as a Gift
How gifting works
Create Widget
Tags: coming of age a story of redemption
About Lance Levens

Lance Levens lives and writes in Savannah,GA, with his wife, and Schnoodle, Moe. He has published a chapbook, "Jubilate," and and has received two Pushcart Prize nominations for fiction and poetry.

Reviews of A Kaddish for Inhuman Steadman by Lance Levens

A Kaddish for Inhuman Steadman is a thoroughly entertaining novel which keeps the reader's interest completely. The characters are all interesting. I welcomed each chapter as a new character was introduced, or a quirky one reappeared. Mr. Levens' use of southern dialogue was spot on. As you read this book, you feel as if you are walking with the characters, experiencing what they encounter. The way Mr. Levens reaches an unlikely conclusion in such a believable way is remarkable. Five stars!

I really like books that tell engrossing stories---that move along with an interesting, active plot. I like them more if the characters change in ways that make the story meaningful to me—that make the book more than an entertaining diversion. And, I like them even more if they are also funny. (As an example, Michael Malone's 'Handling Sin' is at the top of my list.)

When I happened across 'A Kaddish for Inhuman Steadman,' I was intrigued by the synopsis, but it seemed a bit improbable. A coming of age story set in rural Georgia wherein a Jewish refugee from Europe somehow leads the adolescent characters to an awareness that might transform their lives---this would be a tall order for even Flannery O'Conner.

But I must say that Mr. Levens manages it very well. It's a great, rambling story, a story that's hilarious in small ways and big ones, but that ends with the kind of change that moves the boys from bumbling adolescent yokels to a place of grace, repentance and a new self-awareness that is ultimately hopeful.

I once heard Tom Peters, the business guru, say that it's always important to remember that everyone has a story. That's especially true in novels, and everyone in Kaddish has a story that organically moves the plot along, and helps us understand the characters as they grow and change. The four boys, friends since childhood, who build a camp in the woods that is a shrine to their growing sexual awareness. The weight-lifting girlfriend and object of desire and lust. Her manically driven coach. The wise and Biblically grounded Jewish guide and guardian, father to one of the four. And there are plenty of both strange, and outright bizarre characters, too—types that are not unknown in Southern fiction. There's even a cat with an unlikely Biblical name.

This is a odd bunch to throw together in a small-town setting, but it's no stranger than any collection of four people trying to grow up. It's when their casual, thoughtless actions bear real-life consequences that the novel moves from just an entertaining book to a significant guide to how to live a better life.

The best thing about this book, though, is that it does this completely naturally--through the movement of the story itself. I'm in awe of any writer who can manage this kind of challenge as Mr. Levens does, and I'm eager for his next book.

You have subscribed to Smashwords Alerts new release notifications for Lance Levens.

You have been added to Lance Levens's favorite list.

You can also sign-up to receive email notifications whenever Lance Levens releases a new book.