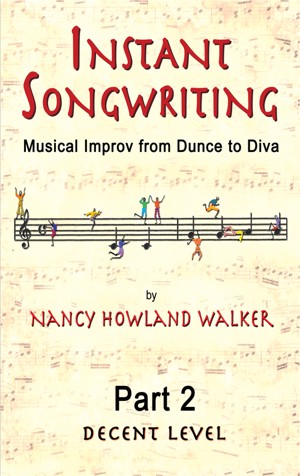 Whether you are new to the art form or experienced, your songs are improvised or written, or you do this for fun or profit, Instant Songwriting helps you take your song skills to the next level. Musical tracks are included for each exercise – to accompany you as you practice and master each step along the way.

Nancy Howland Walker is a full time SAG/AFTRA actor, writer, teacher and trainer who has been performing, teaching, directing, and producing improv since 1989. In Boston, she was the Artistic Director of TheatreSports and ImprovBoston (New England's longest running comedy troupe). In Chicago, she is the Executive Director of Chicago Improv Associates, which offers improv-based entertainment and corporate training.

Nancy’s specialty is musical improv. She has sung short-form musical improv games with ImprovBoston, the International Improvisational Theater League, TheatreSports, Just For Laughs, and the Disney Cruise Line. Nancy has also sung in long-form improvised musicals with ImprovBoston and the Free Associates (Divamatic, an improvised cabaret), and in 1998, Nancy created, produced, directed and performed in the critically acclaimed show MUSICAL! the musical, the country’s first two-act completely improvised modern Broadway style musical, which opened in 1998 at Chicago’s Royal George Theatre, and has had runs in Boston, Nashville and various theaters across the country.

Nancy has developed one-day, weekend, and full eight-week musical improv curricula for improv schools, troupes and festivals, and has taught the subject to packed classes all over the world.

You have subscribed to alerts for Nancy Howland Walker.

You have been added to Nancy Howland Walker's favorite list.

You can also sign-up to receive email notifications whenever Nancy Howland Walker releases a new book.