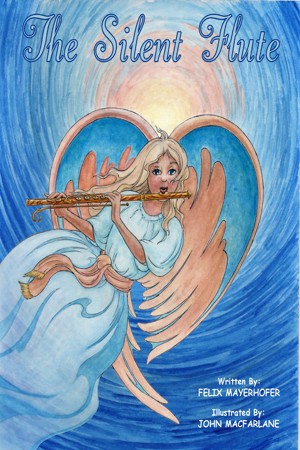 By Felix Mayerhofer
The courage of a 10-year-old girl, who knows she’s going to die of cystic fibrosis, is the subject of this poignant true story. With the short time left, Jennifer’s greatest desire in her weakened condition is to be able to play the flute. (Age Level – 8-11)

Felix Mayerhofer, born and raised in Port Chester, NY, in 1930, is the son of the late Simon & Maria Mayerhofer. Simon was a respected professional linguist & Maria a reputable choir director for Corpus Christi Church for 35 years. At age 19, Felix attended Juilliard School of Music on full scholarship. While practicing one day in his hotel room, he was interrupted by a knock on the door and was offered a job to go on the "road" with the Ina Ray Hutton-Randy Brooks Band. He also played with Bobby Byrnes & Sonny Dunham until the Korean War. His 552nd Air National Guard Band was stationed at March Air Force Base (CA) for 2 years. Upon his discharge, his sister, vocalist Scottee Marsh, and her lead trumpet husband, Carl Erca, got him a job with the Bernie Cummins Band. He also performed with the Ray McKinley Band until he joined the hit Decca Records recording band, Eddie Grady and the Commanders. He received his B.S. in Music Education from the SUNY, Potsdam. He then worked with the Allen Keller Trio in Florida, New York City, Las Vegas and Reno. While in Reno, Felix joined a jazz-pop group, Nancy Lee and the Bachelors. They were headliners in Lake Tahoe & Reno casinos before performing at the Dream Room on Bourbon St. in New Orleans for an extended stay. After that he played with a variety of bands. He toured and recorded with Fred Waring and the Pennsylvanians for a year - until he met his future wife, Shirley Wagner (Wagonseller), a professional dancer at Harrah's Club in Lake Tahoe. Felix and comedian-musician Bobby Day formed a comedy team, "The Unpredictable Day and May," which toured for a brief time. Felix taught in the Palmdale School District for 27 years teaching concert and jazz bands at all levels until his retirement. While teaching he received an M.A. from Azusa Pacific University in Azusa, CA. Since retirement, he has written 36 children's stories.

You have subscribed to alerts for Felix Mayerhofer.

You have been added to Felix Mayerhofer's favorite list.

You can also sign-up to receive email notifications whenever Felix Mayerhofer releases a new book.