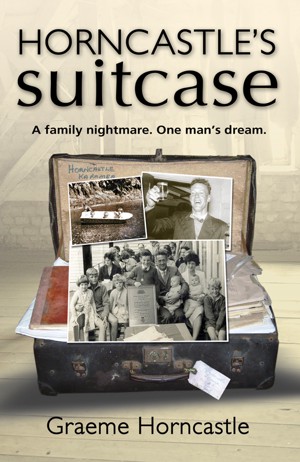 By Graeme Horncastle
My life growing up on the West Coast NZ in a poor farming family of 12. A quick paced read that takes you into my personal life- my alcoholic father, making do out of nothing, finding wealth in business, losing a daughter to cancer, attempted suicide, depression, alcoholism, and coming back out the other side to an amazing family and supportive friends. Still here and I want to make a difference. More
I couldn't spell and had hardly written a letter in my life. I’d always had someone else to do mail for me. But I was determined to learn, and with one finger I started. I decided to write about some of the things I remembered from childhood, and that's how I got properly started. Before long I had learned my way around the keyboard and had become a two-finger typist. Then, as with anything else I do, I started working on it day and night. At 55 years of age I figured it was high time I learned how to use a computer as they were everywhere and I had fallen behind.
Who was I? Where did I come from, why was I here, where was I going? These questions wore away at me. This is the sort of mind-searching people in my condition often go through. My mind was repairing itself after a succession of tragedies in my life, especially the untimely death of my beloved daughter Shelley. I needed to keep my mind occupied without putting too much pressure on myself. So I started by writing about the early part of my life. I thought it might help my confused state of mind. There was plenty I wanted to say but it wasn’t easy to get it down. Even the spellchecker wasn’t much help as it couldn't recognise many of the New Zealand words and expressions I was writing.
At first, when sleeping, my nightmares came back, and then the mixed dreams of events over the last fifty years, slipping backwards and forwards in time and not making a lot of sense. But with time the dreams became more pleasant, my mind started to settle, and a clear picture started to emerge. It showed what I was thinking about the people in my life and the events that had shaped me into who I am today.
Gradually, putting all this together increased my understanding and helped me to see people in a different light. I learned to judge them differently. Mainly, I learned to judge them less harshly. And perhaps also to be a bit less hard on myself sometimes.
This was writing as therapy, and it worked very well for me. I can now advise anybody that if you do this you may be surprised by the insights you will gain. Writing is a good way to make you think things through.
I judged my father very harshly when I started writing, because I was in the early stages of recovery from alcoholism. This doesn’t mean I didn’t love him, it just shows how the alcoholism took over and clouded his judgement and feelings. As the book and my recovery progressed I developed a lot more insight into his condition and how it made him the way he was. As a result now I feel far more compassion and sympathy for him. I still take the piss out of him a lot in this book but I have really learned how the way he turned out was all down to his family history. Life for him was always either being at a big party or being sunk in a state of despair. There was very little in between. There was no medication available for his condition – except self-medication with the booze.
The way he lived his life helps explains a lot about how I’ve lived mine. The biggest difference is that I was born in better times. Not just better off money wise but better times socially. No longer is there the same stigma attached to mental illness, and abusive behaviour isn’t just covered up or excused any more. Today, alcoholics have more chance of getting good treatment and understanding. I can even go into a bar and order a raspberry and Coke without being called a wowser. That’s one sign that the world is getting better. This book is another.

From a casual first glance one could assume this book is just a boring chronicle of a family. First impressions can be wrong and certainly are in this case.

The story consists of a rollercoaster ride, right from birth in Blenheim, to childhood on a 30-cow dairy farm near Karamea on the West Coast of New Zealand where he was raised by a "devoted mother and a frustrated eccentric father".

Life was great on the Coast for youngsters with weird and wacky incidents but with a father who increasingly took to the bottle, the economics of the farm were rocky and life was full of challenges.

Then followed a teenage marriage with a child due. Graeme Horncastle gritted his teeth and was determined to make a go of it.

He was succeeding but then tragedy intervened with the loss of a daughter to cancer, the aftermath of grief and despair, alcoholism, depression, marital crisis and attempted suicide.

Then slowly Graeme, with support, dragged himself up and got his life back together again. Today the Horncastle family own and operate the 86 room Pavilions Hotel in Christchurch New Zealand.

Born in Blenheim in September 1951, Graeme returned to Marlborough and in particular Picton where he and his wife Maureen took over Oxley's Tavern. Then Australia and then to Christchurch where the author tells of the Christchurch earthquakes of 2010 and 2011.

The book is well produced, well illustrated, and makes for absorbing reading. Graeme is honest, at times almost brutally, but the stories and incidents range from laughter to tears.

There's never been a dull moment in Graeme Horncastle's life with its highs and lows. That is relayed to the reader for an entertaining read.

You have subscribed to alerts for Graeme Horncastle.

You have been added to Graeme Horncastle's favorite list.

You can also sign-up to receive email notifications whenever Graeme Horncastle releases a new book.