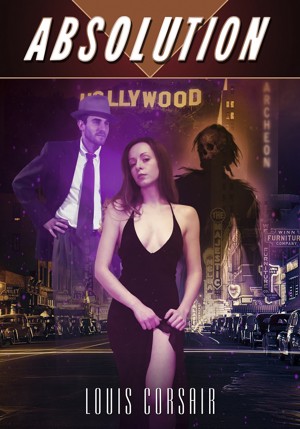 By Louis Corsair
Rated 3.50/5 based on 2 reviews
In 1947, a gangster murders Hollywood Private Investigator, Raymond Adams.

But his toughest case is yet to come. To gain eternal peace, he'll be brought back to life for one day to solve the supernatural murder of an Adult film star. The catch is the year is 2011, not 1947. This is not the Hollywood he remembers. This place is darker, colder; here the urban terrors are not all supernatural. More
In 1947, a gangster murders private investigator Raymond Adams. In 2011, he’s brought back to life for 24 hours to solve the supernatural murder of a Hollywood Adult film star.

When the son of a Pit Lord is murdered in Hollywood, the celestial beings in charge of the Four Realms ask Raymond Adams to figure who did it and find the victim’s missing soul. Without memories of his life, he accepts the case to gain eternal peace. But the job is daunting:

With only the help of a possessed cop and a medium, Adams must trek through a Hollywood underground filled with pornography, prostitutes, the homeless, and sadists, along with supernatural monsters. But can he solve the case when his own haunting memories keep surfacing, telling him exactly what kind of man he was in life?

Louis Corsair is an eight year veteran of the United States Army. Currently, he lives in Los Angeles, CA and attends Long Beach State University. He also works at the Peninsula Center Library in Palos Verdes, where books have become his family. To him, writing is more than a hobby or a passion; it is the only way to exist—at times life itself.

Review
Ron Sewell reviewed on July 3, 2012
(no rating)
Interesting concept that I enjoyed for a while becoming part of. Well worth your time.

My thoughts: More three and a half, than just a solid three star rating. I enjoyed Absolution, even though I rarely read Detective Mysteries. The supernatural spin was great and the characters were likeable. But before going into that, I'll explain the plot:

Private Detective Ray Adams is shot and killed in 1947 and sent to the Abstract Realm, where his afterlife consists of endless fabricated scenarios, meant to rid his soul of impurities. He's not alone in the Realm, Shadow Monger, Harry, is there. But it's not until another Shadow Monger visits that Ray gets his shot at absolution when he's given the opportunity to solve a murder in Hollywood.
But it's not any old murder investigation, brought back to life for only twenty-four hours, he has to find out who murdered Gio, a Pit Lordling (and son of Pit Lord, Lucifer) and locate his missing soul.

Faced with supernatural and celestial beings, Ray's investigation soon spirals out of control when more dead bodies begin to rack up without souls and every lead he gets; pushes him further into chaos.

Absolution pretty much has a lot going on with quite a few characters. But these characters do help add to the mystery of who the culprit actually is. I changed my mind a few times when trying to figure it out.

I liked Ray instantly, a no-fear kind of guy, he knows how to do his job well and thinks fast when in sticky situations. The fact he had a thunderbolt gun just made him cooler lol. Once fired at a target, a moment later the target would then be struck with a strong lightening bolt.

Louis Corsair's Absolution is an unusual novel, a 1940s pulp detective novel, transported to present day LA, and coloured with the trappings of an urban fantasy. It's an awkward mingling of genres that shouldn't work, but which he manages to pull off.

The story starts with a bang - literally - as Raymond Adams is shot dead in an investigation gone wrong. From there we're transported to a kind of limbo, complete with a supernatural attendant, before he's called upon to make a temporary return to the land of the living in order to investigate a supernatural death.

If I had one problem with the novel, it's that the mythology behind the tale (which is pretty heavy) is simply dropped on the reader. As a reader whose knowledge of all things spiritual pretty much begins with Dawkins and ends with Hitchens, I'm not sure how much of the mythology is canonical and how much is imagined, but I definitely felt lost for the first few chapters. Corsair offers enough tidbits for the reader to get by, but I do wonder if perhaps I missed something.

That one quibble aside, this is a story that works very well. There's just enough culture shock for Adams to ring true, without being too comical, and his deadpan gumshoe narration comes across as authentic. The range of characters is just as unsavoury as you'd expect from such a tale, complete with the proverbial stripper with a heart of gold to keep the detective on track. Jenn was definitely an interesting character, one who seemed to go along with all the weirdness a bit to easily, but who does get her WTF moment later on.

This is a genuine whodunit, an old fashioned mystery that keeps you guessing. The twists and turns are genuine ones, honestly presented to the reader as Adams comes in contact with them. There's no feeling that the author is holding back or cheating the reader, and the joy of working the case alongside Adams keeps the story going.

While there are some horrific moments, and some instances of questionable morals, Corsair is generally content to show and not tell. He's economical with his words, never wasting the narration on details that are not integral to the plot . . . or of interest to Adams.

All-in-all, an unusual novel that works better than I expected.

You have subscribed to alerts for Louis Corsair.

You have been added to Louis Corsair's favorite list.

You can also sign-up to receive email notifications whenever Louis Corsair releases a new book.