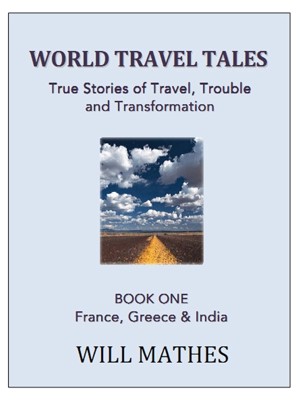 By Willy Mathes
“Strange Angels,” the first of two travel stories, is about my adventure-filled odyssey hitchhiking from Oxford to Greece through the French Riviera, meeting unexpected allies and mystical messengers along the way.

In the concluding story, “The Delhi Belly Blues,” I recount a harrowing, yet ultimately illuminating month in N. India, facing amoebic dysentery and a young, marriage-seeking nurse. More
In World Travel Tales: True Stories of Travel, Trouble and Transformation – BOOK ONE: France, Greece and India (and this entire World Travel and Adventure series), much of what I’m going to share with you has to do with walking, hiking and hitchhiking in exotic places, and the seemingly extraordinary situations I often end up finding myself in as a result. But there’s more.

Because, walking around by yourself, or hiking through the wilderness, or hitchhiking just about anywhere, these modes of travel—if you’re paying attention—naturally change your perception. What I mean is, they shift your perception, from what you thought was going on or expected to happen . . . to what TRULY is going on and what REALLY is happening. In my mind, there is no such thing as an “insignificant” shift of perception . . . since each one contributes to a greater overall awareness of what we call “reality.”

In BOOK ONE’s first story, “Strange Angels,” you’ll read about my adventure-filled odyssey hitchhiking from Oxford, England to Greece through the French Riviera, meeting unexpected allies and mystical messengers along the way, who inevitably lead me to a profound insight about myself and “others.”

In the concluding story, “The Delhi Belly Blues,” I recount my harrowing, yet ultimately illuminating spiritual journey through northern India, by way of a month-long international symposium that turns into a fight for my life and my freedom – by way of my contracting amoebic dysentery and encountering a nurse whose wealthy father wants me to marry her, so she can go to a prestigious American medical school!

Will Mathes was born and raised in the San Francisco Bay Area during the 60’s, and began college at Maharishi International University in Fairfield, Iowa in 1974. There, he received both a bachelor’s and a master’s degree in education, and met many inspiring, well-traveled souls. At the conclusion of his graduate program, Will spent time (along with many others) studying the Vedas in India with Maharishi Mahesh Yogi. Upon returning to the U.S., he soon set off traveling again, living in Europe for a year, spending the majority of his time in Paris, London and Oxford (with extended jaunts to the Swiss Alps and Greece). Once back in the U.S., his involvement with a variety of Asian import businesses (handmade furniture, art and antiques) brought him out to China, Thailand, Hong Kong and Macau. On various other excursions, Will has spent time in Italy, Egypt and Morocco, as well as a month in Aguilas, Spain, along the Mediterranean coast. He has hiked in many of America’s major mountain ranges, and has hitchhiked both across the U.S. and throughout Europe. Currently, he resides with his fiancée on top of Lookout Mountain in northeast Alabama.

You have subscribed to alerts for Willy Mathes.

You have been added to Willy Mathes's favorite list.

You can also sign-up to receive email notifications whenever Willy Mathes releases a new book.