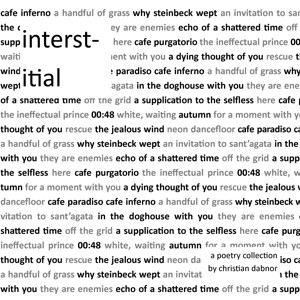 By christian dabnor
Interstitial is a collection of poetry by Christian Dabnor. More
All profit from sales of this book will be donated to the Red Cross.

This collection is, by no means, a complete history of my poetry. There are poems that I don’t like, there are poems that just don’t seem to belong with the others, disruptive senryu about facial hair, or unruly acrostics about Dracula. This is, however, a collection of poems that suit a time and a place in my life, a twilight period in my mid thirties, where suddenly the idea that this is my life, for god or ill, becomes a very concrete reality. I’d like to thank Lara, my muse, my parents and friends and those people who’ve supported me, whether it’s kicking my backside or in a more gentle fashion.

You set the price! USD
Buy Add to Library Give as a Gift
How gifting works
Create Widget
Tags: poetry beat
About christian dabnor

Chris Dabnor is a writer and part time literature student, currently living in Cannock, in the United Kingdom, where he works as a software support analyst. His previous short stories have been featured in such magazines as Astonishing Adventures, Twisted Tongue and White Chimney, and cover a range of subjects between Victorian time travelling dinosaurs, film noir ghosts and the psychopathically insecure. He is currently working on his second novel. Any hint of sombre fatalism in his stories is most likely attributed to his being an avid Wolverhampton Wanderers fan.

You have subscribed to alerts for christian dabnor.

You have been added to christian dabnor's favorite list.

You can also sign-up to receive email notifications whenever christian dabnor releases a new book.