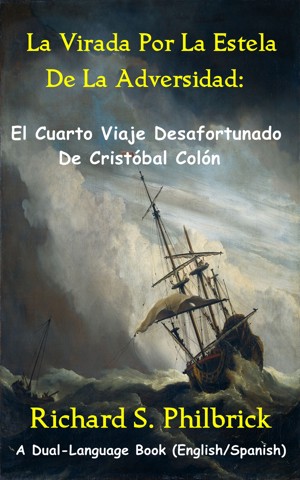 By Richard Philbrick
This dual-language book about the calamitous fourth voyage of Christoper Columbus is designed for English-Speakers studying Spanish. The Spanish text is shown in boldface followed immediately by the English translation in italics. One can easily read the book in Spanish as one normally would or quickly check the translation to see how good their comprehension is. More
This is the incredible, true story of the calamitous fourth voyage of Christopher Columbus to the "New World." It has all the elements of fiction...hurricanes, pitched battles with the natives of Panama, being marooned on Jamaica for more than a year, mutiny by half of the crew, bloody battles with former shipmates, a heroic trip in an open canoe over the open ocean before final rescue.

Raised on Cape Cod. Lived in New Orleans for 10 years and left long before Katrina. Worked as a newspaper reporter, magazine editor, hospital public relations director and freelance writer before chucking it all and following my bliss which was to work on boats. Became a Coast Guard Licensed captain and worked for 20 years running yachts and small commercial craft including a three year stint as captain of a large sailboat on the French Riviera and sailing across the big pond in '91.

In my own small sailboat I single-handed from Fort Lauderdale to Mexico, Belize and the Rio Dulce in Guatemala and back.

You have subscribed to alerts for Richard Philbrick.

You have been added to Richard Philbrick's favorite list.

You can also sign-up to receive email notifications whenever Richard Philbrick releases a new book.