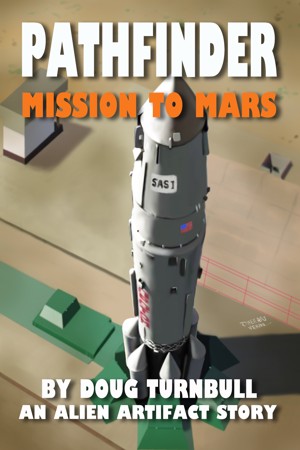 By Doug Turnbull
A woman and two men are instrumental in assembling the Pathfinder Mission, the first mission to colonize Mars, the red planet. Both men are in love with her, she is in love with both of them and yet only one of the three will be going on the mission. Enjoy the science, romance, intrigue, and adventure of this fast moving story. More
Set in the next decade, this story details the eight year long robotic construction of a settlement on Mars and the preparations leading up to the mission to occupy the colony. Grand in scope, the action of the story takes us from Tucson Arizona to Laredo, Texas to Washington, DC to Baikonur, Kazakhstan to Earth orbit and, of course, to Mars.

Dr. Helen Meers, retired astronaut, Bill Mayfield, robotics tycoon and Hector Rodriguez, former Marine captain are the main characters of this story and are three points of the eternal love triangle. Complicating this already complex situation is the fact that only one will be going to Mars. How this seeming conflict is finally resolved will both intrigue and amuse the reader.
This is Hard Science Fiction. Everything that is done during the course of the story is possible using technology that exists today and that fact points to one of the underlying themes of the story. Colonization of the moon and Mars is not something to be done in some distant future. Rather, the projects can and should be started right now, today!
Available ebook formats: epub mobi pdf rtf lrf pdb txt html
First 20% Sample: epub mobi (Kindle) lrf more Online Reader
pdb
Price: $0.99 USD
Buy Add to Library Give as a Gift
How gifting works
Create Widget
Tags: robotics mars robots red planet moon colony nasa space flight space program esa proton mars colony roscosmos baikonur
About Doug Turnbull

Reviews of Pathfinder by Doug Turnbull