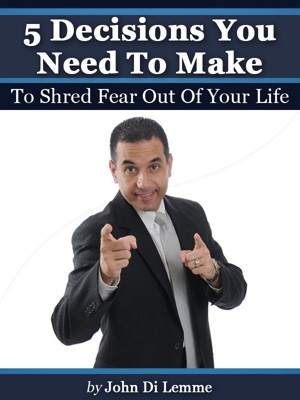 By John Di Lemme
In this report International Motivational Speaker and Strategic Coach John Di Lemme shows you the 5 Decisions you need to make to eliminate fear out of your life forever so you can achieve ultimate life success.

In September 2001, John Di Lemme founded Di Lemme Development Group, Inc., a company known worldwide for its role in expanding the personal development industry. As President and CEO, John strives for excellence in every area of his business and believes that you must surround yourself with a like-minded team in order to stay on top of your game.

In addition to building a successful company, John has changed lives around the globe as an international, elite speaker that has spoken in over five hundred venues. Over the past fourteen years, he has shared the stage with the best of the best including Rich Devos, Denis Waitley, Jim Rohn, and Les Brown only to name a few. This is truly an amazing feat for someone that was clinically diagnosed as a stutterer at a very young age and told that he would never speak fluently. John’s teachings have also been featured on Fox Small Business, Inc. Magazine, CNBC, and in many other media outlets.

John truly believes that everyone needs personal development to reach their full potential in life, and his determination to reach all forms of media with his motivational messages has catapulted his career. John has produced over four hundred fifty products and is an accomplished author of thirteen books including his best-selling book, “ABCs of Millionaire Marketing.” As a High-End Business Consultant, Strategic Business Coach, and Small Business Expert, John’s students include doctors, lawyers, entrepreneurs, consultants, CEOs of million dollar companies, and various other occupations that are thriving in a so-called poor economy. John’s success with his students has made him one of the most highly sought after business coaches in the world.

John’s passion is to teach others how to live a champion life despite the label that society has placed on them. Through his books, audio/video materials, sold-out live seminars, numerous television interviews, intensive training boot camps, weekly tele-classes, Strategic Business Coaching, Closing & Marketing University, Millionaire Affirmation Academy, Billionaire Business Motivational Marketing Tip of the Day, and Lifestyle Freedom Club memberships, John has made success a reality for thousands worldwide.

You have subscribed to alerts for John Di Lemme.

You have been added to John Di Lemme's favorite list.

You can also sign-up to receive email notifications whenever John Di Lemme releases a new book.