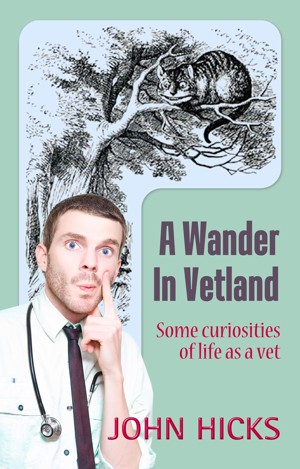 By John Hicks
Rated 5.00/5 based on 4 reviews
John Hicks has spent much of his working life as a vet in New Zealand. A Wander in Vetland is an insider's look at his changing profession. These lively tales draw the reader into the more curious aspects of medical and veterinary history - ideal reading for those curious about borborygmi, the use eunuchs made of goose quills, or the potion favoured by Italian women to seduce their lovers... More
John Hicks is an English trained vet who has spent much of his working life in rural New Zealand. On one level A Wander in Vetland is an insider’s look at his changing profession. Hicks's entertaining anecdotes mark a fond farewell to “Herriotism”: the dated public image of life as a rural vet, so lovingly depicted in the novels of James Herriot.
But this memoir has a far broader scope. In a lively, literary style John Hicks links his tales with some of the more curious aspects of history - particularly veterinary and medical history. Hemlock poisoning leads to a discourse on Socrates’ death; brain surgery on a ram poses the question of how Neolithic man performed similar operations. There are insights into the nature of bladder stones in animals and how these relate to the suffering of Samuel Pepys in the seventeenth century; and if you ever wondered how Italian women seduced their lovers or about the use of goose quills by eunuchs in Eastern seraglios, the answers are here.
A Wander in Vetland also tackles serious issues such as a personal account of facing cancer. It is at turns fascinating, hilarious, and sobering or - as in an expose of how Noah collected animals for his ark - riotously satirical. An unusual and highly entertaining read.

I am a retired veterinarian. My wife and I emigrated to New Zealand in the early 1970s. Apart from a brief stint in a dog and cat practice in Yorkshire, I spent most of my working life in various parts of rural New Zealand enjoying the challenge of mixed practice with sheep, deer, dairy and beef cattle, horses, working dogs and pets.
For my two veterinary memoirs I have drawn as much on my formative years in England as my subsequent experiences in New Zealand. Emigration brings with it a questing interest in origins and roots and this is also a theme in my writing.
I was the 'Vet Talk' columnist for The Southland Times for several years and have contributed articles to scientific journals and various magazines. My columns were usually of a quirky, or satirical nature - in similar style to that I have used in 'Pizzles in Paradise', which was first published by Hazard Press in New Zealand in 2005 and reprinted in 2007.
The new edition of 'Pizzles in Paradise', and its recently completed sequel, 'A Wander in Vetland', were my first ventures in epublishing.
I have always been drawn to literary fiction and 'She Bid Me Take Love Easy' is my first work in this genre. It is a coming-of-age novel that draws heavily on my own experiences of boarding at a strict single-sex English public school and the subsequent shock of release into university life during the “swinging” ’60s: the confusing years when society's attitudes towards sex were being redefined. I have used a parallel true story - an account of a disastrous love affair in the Indian Army in Victorian times - to delve into themes of obsession, love, jealousy and sexual morality.

Also in Series: An English Vet's Life in New Zealand

This book reads extremely easily and is a collection of very amusing anecdotes, all true, from John's veterinarian life. It follows on seamlessly from Pizzles in Paradise.
It is very well written and makes excellent holiday reading. I can thoroughly recommend this book.

This is an absorbing and entertaining book, I read it in a week. There are loads of fascinating medical facts interwoven with vetting stories and interesting characters. I learnt a lot without even trying! The author uses vivid descriptions and humour throughout. Definitely a memorable book.

(reviewed 72 days after purchase)
Caryl Marshall reviewed on July 16, 2012
(no rating)
Reviewed by Daryl Marshall 17.7.12
This book is one of my best reads. John has captured the action and interclient relationship of veterinary practice.
John is a gifted writer.
5 stars

(reviewed 16 days after purchase)
Caryl Marshall reviewed on July 16, 2012
(no rating)
This book is one of my best reads,definitely in my top five.
John has captured the action and interclient relationships of veterinary practice.Just read the chapter about Sid Taylor with his ability to talk and understand Afrikaans.
John is a gifted writer.

Another great read. Amusing vet tales, thought provoking vet tales, and some fascinating history... amazing how it all links up! Highly recommend this book!

You have subscribed to alerts for John Hicks.

You have been added to John Hicks's favorite list.

You can also sign-up to receive email notifications whenever John Hicks releases a new book.