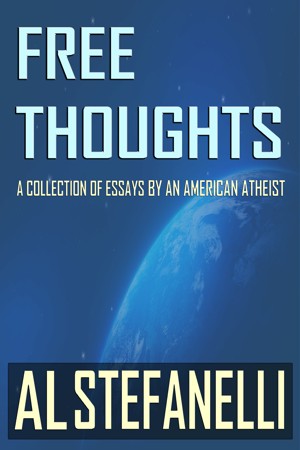 Free Thoughts - A Collection Of Essays By An American Atheist

By Al Stefanelli
This book is a collection of the top 60 most critically acclaimed essays and articles written by Al Stefanelli. They represent the cream of the crop, and have been re-edited and refreshed for relevancy and content. This is a compilation that you will definitely want to have on your digital book shelf.

He has been a writer and journalist since 1993, starting out as a weekly columnist for a McClatchy Newspaper where he wrote a column called "Think About It" for ten years. His work won a North Carolina Journalism award. Al also produced and hosted the weekly syndicated radio broadcast "Millennium" for three years. Al currently writes for the National Atheism Examiner and Associated Content and his work has appeared in numerous publications, news feeds and has been widely distributed throughout the web.

His personal blog, aptly named "A Voice of Reason in an Unreasonable World", enjoys wide popularity, and he also publishes the "New Atheist Times," "Atheist Action Alerts," and "Atheist Syndicated Press," as well as the Podcast "Radio Free Atheism," available on iTunes

You have subscribed to alerts for Al Stefanelli.

You have been added to Al Stefanelli's favorite list.

You can also sign-up to receive email notifications whenever Al Stefanelli releases a new book.