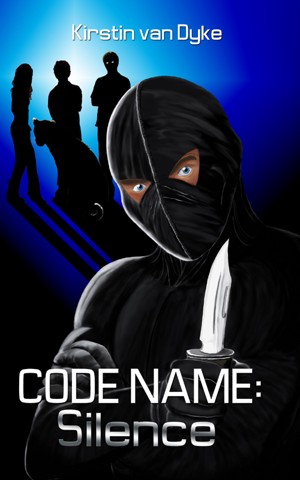 By Kirstin van Dyke
Kathy Allen has a talent no one else has - she can walk through walls! While she her friends are gifted with superpowers, they aren’t superheroes. All they have now is a dream of using their powers to fight crime.

When a masked theif, code named "Silence", proves too stealthy to be caught by normal people, Kathy's dream is given a chance to become reality - but it quickly becomes a nightmare. More
Four normal lives...
Four extraordinary humans...
...are about to be changed— forever.

Imagine what it would be like to walk through walls. Kathy Allen doesn’t have to. She already can. She and her friends aren’t normal. They’re stronger, faster and have amazing abilities that no normal human could ever have...but they aren’t superheroes. Yet.

Right now, all Kathy’s powers are good for is getting her to school on time. She knows she could do much more, but the professionals are handling all the normal crimes. Until now.

A masked thief emerges that no one can stop. He leaves no clues. Security systems are no challenge for him, but Kathy thinks she and her friends are. The chance to prove themselves has arrived. And when you’re a superhero, what can possibly go wrong?

Young adult, sci-fi/fantasy author, Kirstin van Dyke was inspired at age 15 to begin writing "Code Name: Silence". She has always had a fascination with superheroes, superpowers, and has had a lifelong obsession with fantasy and the unknown. It took her three years and nearly ten rewrites before "Code Name: Silence" became the adventure that it is now.

Born and raised in Portland, Oregon, Kirstin showed an interest in art and writing at a very early age. She started to put together "picture books" when she was four years old, and wrote her first story when she was six. When she was in third grade, one of her illustrated books won third place in OPB's "Reading Rainbow Young Writers and Illustrators Contest." Ever since, Kirstin dedicated herself to expanding her writing skills into a career. She taught herself art and writing with various textbooks and then took formal art training and writing classes for three years. She wrote "Code Name: Silence" during that time.

"Team: Silence" - the sequel to Code Name: Silence" was published in April 2012 and is Kirstin's second book in print.

Kirstin lives in Oregon with her family, where she continues to write novels, poems, and short stories. In her free time, she likes to paint, draw, and go trail riding on her horse Romeo. Never lacking for ideas and inspiration, Kirstin's dream is to keep creating stories, and put her imagination in writing for other people to enjoy.

You have subscribed to alerts for Kirstin van Dyke.

You have been added to Kirstin van Dyke's favorite list.

You can also sign-up to receive email notifications whenever Kirstin van Dyke releases a new book.