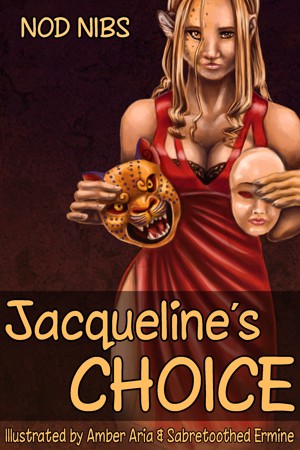 Features 13 illustrations though out the novella.6 More
Jacqueline Hopla has a wonderful husband who loves her (in and out of bed), a steady job, and a nagging desire for something else. But she gets more than she bargained for when she climbs on stage with Menzo the Magnificent. No simple magician, Menzo is a Fey noble and he intends to return home with a pet for his icy Queen. Enveloped in his web of glamour, Jacqueline is unwittingly transformed into an exotic leopard woman.

Can Jacqueline’s deep love provide an anchor against the storm of her new instincts and lusts?

Can Dave, her husband, love the predator Jacquline has become? And avoid the razor-sharp claws that lurk beneath her soft, spotted hide?

Or will Menzo use their doubt to enslave them both to the savage lusts of the Queen of Winter? Regardless, no one will survive unchanged.

Mr. Nibs lives high in the mountains of New Mexico with his wife and their three cubs and a hatchling. Most of his time is occupied with battling the dark horrors that continually attempt to invade human realms. It though the constant encounters with the speakable horrors and his wife that give birth to the fugues that forces him to grab whatever is handy and write these insanities. Some of these insanities arn't all that bad and are worth sharing with the world.

Mr. Nibs advises anyone who hears voices in their heads after consume one of his fine insanities to seek medical attention, unless of course you live in Arkham where medical professionals should be avoided at all costs.

This does not review, final comparison. Next note put in translation done work you bought, but it serves to see how change has made work.
Note: There was a draft version tf lab Tf (post called 500 word or less), unfortunately it was lost before you translated not include it:
In the current version, it fixes some problem, such as the intervention queen fary that comes out of nowhere, almost being a doex machina (by misfortunes aregla by means of elimination his intervention and development of this), close satisfactory form mezo arch, detino of the characters left on the air. I would have liked recovered the scene from the end of the doctor, a hundred better follow-up to the secondary conflito of the characters and made it clearer than Dave even under lycanthropy curse. It was more satisfying because so open the current not really conclusive anything.
By misfortunes current verion retains failure despite a more satisfactory conclusion with Mezo, Dave still has no real closure, final sex scene if he only says nothing, there is no follow-up to the character like that potion. Version lycanthropy issue of dave side very fast and follow up thing if they do last verdict. Not to mention passing focus Dave Maso very quickly is more subjective.

Personally I can not get a new version that is lower than the previous one, I have a crossed feeling I thought final pairs more than LAB TF law, THAT IS WHY I BUYED IT ORIGINALLY.

A basic book with Transformation sequence, and dealing with the aftermath of said transformation. Some of the inbetween sequences could have been extended and flushed out, There is not much back story of the characters. This is a decent and basic Erotica.

You have subscribed to alerts for Nod Nibs.

You have been added to Nod Nibs's favorite list.

You can also sign-up to receive email notifications whenever Nod Nibs releases a new book.