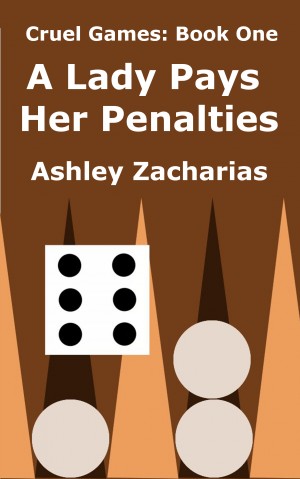 A Lady Pays Her Penalties

About the Series: Cruel Games

Leslie is a sexual masochist who loves games. To make backgammon more exciting, she designs cruel penalties that she must suffer if she loses.

This was a book containing three short stories involving the same characters. Well, same two then an additional third in the third story.

There’s a forward in the book about sexual masochistic people. And about how this book contained stories involving one such woman, Leslie. I’ve one small problem with that – for the most part, the first two stories appear less to involve a sexual masochistic person, and more to involve a woman who, at a minimum, is super competitive and felt the need to punish herself when she lost games. Such a person is not exactly the same thing as a sexual masochistic person. The third story also seemed more about self-abuse that was not in any way enjoyed and only suffered through because of how super competitive Leslie is about stuff. At least until she accidentally and unexpectedly found some pleasure spring upon her during the humiliating scenes in the third story. All the way up to that point, she got nothing out of it. At least she was described as having gotten nothing sexual out of the events. I would assume, maybe wrongly, that a sexual masochistic person would ‘get something’ out of being a masochist. To reiterate, Leslie got nothing out of the first two stories but punishment – which, I know, can be what a masochist wants, but I mean sexual pleasure from the events, and from the punishments. Leslie got pain, humiliation, disgust, more pain, and what she wanted – punished for losing. As I said, she seemed like a super competitive woman who didn’t take losing very well.

I just read a story about Aaron Rodgers, a professional quarter back. It mentions how super competitive he is. How he turns everything into a competition and hates to lose. I do not exactly imagine him punishing himself when he loses so much as I could see him as the kind of person who, if he felt the need to punish himself for losing, would do so and feel no pleasure in it. I mean, that kind of defeats the purpose of punishment, yes? To get rewarded for losing?

So, to a large extent, that’s my problem with that forward about sexual masochists and calling Leslie one. Because she was described, shown, and revealed as someone who was super competitive and who needed to punish herself. She was revealed as someone who needed to punish herself, not reward herself. Even if the ‘reward’ would be seen as others as punishment. If she got ‘something’ from punishing herself, orgasmic release, anything like that, I doubt she would be happy with that. To put it another way, if she ‘enjoyed’ finding pleasure from self-fondling/pleasuring/etc. and that was the way she got enjoyment/pleasure/etc. then I doubt she would have, as a punishment – self-fondling. Similarly, if she got enjoyment/pleasure/etc. from having someone whip her, I doubt she would feel she has been punished by having someone whip her. And, to a large extent, Leslie was described as someone who got nothing except punishment from the actions that occurred. That is, as noted, up until a moment in the third story when she found herself – while in great pain/humiliation/degradation, - found her body responding through the pain to find pleasure.

Right, as normal I included little notes to myself as I went along.

Note: Introduction mentions some people just love pain. First story involves woman who is competitive to point needs to punish self. Seemed to get no enjoyment from pain. POV - helper, though." - The point of view was from the helper, Craig, who spotted for her so that she didn’t accidentally kill herself. She almost lost a hand due to self-bondage gone wrong, and Craig had to break into her house to save her – this was an event prior to the start of this book. The point of view of the first book was from Craig’s perspective, so I do not know if pleasure would have been revealed if the first story would have been from Leslie’s point of view. I kind of doubt that, though, based on how things were described. Not because I can’t imagine someone getting pleasure from the events, but because the reactions did not seem consistent with pleasure.

Okay then. The first story involved Craig watching Leslie play backgammon. Several games played. When she won she continued, when she lost she got a sealed punishment envelope. She wrote . . . I can’t recall now how many, but . . um, at least four phases.

The story then turned to the basement wherein she entered wearing business attire and high heels. Got herself positioned, bound, and, through phases, had her clothing cut off, and much strain put on her body from being hung by her arms/shoulders. Wait, it didn’t start in the basement. Bah. See, I read this slower than normal so it’s been a while since I actually read the first story. Various punishments occurred in the house. This included being spanked, hung up, clothes cut away, etc. Actually, maybe it began in the basement then went upstairs, I now recall that as what occurred. Leslie did not seem to get any enjoyment from this activity. – 4 stars.

Third story – locked in her own house. As in a chain on her ankle. In living room. With uncovered windows. Bright lights on. Naked. For weekend. Another guy enters the picture on Saturday. I didn’t particularly like having a third person enter the story, but whatever. POV from Craig and Leslie. And partially from the third person, whose name might have been Alex. An unexpected moment of pleasure occurred during the activities. By this point, Leslie might be growing into becoming aware of being a sexual masochist. 4 stars.

I read it twice! Fantastic! Wow! I cannot put enough exclamation marks in this review of your incredible book! You have put a bit more excitement in my marriage, both my wife and have read this and it's done some things! Wow!

Really liked it. It avoided the trap that many books in this genre fall into - either the action is so mild that the protestations of pain seem pretentious and meaningless, or they seem abusive of the sub - to the point where it ceases to be amusing or even interesting. But the author has developed a brilliant device here, where the action is really quite extreme but the sub genuinely controls it too.

Well-paced, exciting, titillating and with a certain sense of lightness about it.

Definitely on the extreme fantasy side as far as I'm concerned - I wouldn't dare to try anything like this! But even so, I couldn't help being fascinated and couldn't stop reading.

Being an extremely analytical person by nature, I visualized all of these punishments, and looked for ways to use them in my own life, applying my own unique twist to the act.

I look forward to more work from this author.

An excellent read. I found there were a few bumps to be expected in a free unedited book. about a dozen typos total in all four stories, (a few misspellings, an occasional word repeated, and one instance of a British spelling in a book that is otherwise all American English) not much worse than some books that are professionally edited.

The stories are not so much titillating as they are intellectually stimulating. The first three stories are a wonderful collection of an extreme control freak who after an accident, resigns herself to being supervised and assisted in sexual punishments she has predetermined as the penalty for losing online backgammon games.

The fourth story is some time later after she has married and begins to play a game with her husband, to spice up what he considered a marriage gone bland. The fourth story was not quite as good as the first three in my opinion but the previous easily carried the last story. The ending of the last story isn't a surprise but certainly makes you wonder.

This collection is by far the best free ebook of this genre I have read.