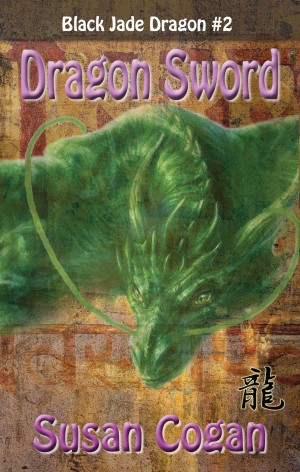 And this is how it all starts:

I needed to steal something.

I don't mean I really wanted something in particular. I mean I wanted to steal something.

So to scratch that itch I was climbing up the side of the Twelve Treasure Museum to a hidden floor not open to the public. It was supposed to be haunted. That was perfect. Perfect for me anyway.

I'm Angie Tanaka, the one woman crime wave. That's what it says on my business cards. I stumbled across this museum one day when I was bored and feeling too much like an upright citizen....

I pulled myself up onto the roof—the first level of the house, anyway. It was an old-fashioned Chinese pagoda built like a wedding cake. The outside was covered with the Asian version of gingerbread. The carvings and embellishments had a dragon theme, but a lot of things are decorated with dragons on Shaolong, the Land of Nine Dragons. Real ones. I'm being honest here. I bullshit a lot—I was kidding about the business cards—but not about this.
Available ebook formats: epub mobi lrf pdb html
First 20% Sample: epub mobi (Kindle) lrf more Online Reader
pdb
Price: $2.99 USD
Buy Add to Library Give as a Gift
How gifting works
Create Widget
Tags: adventure china dragon sword taiwan katana
About Susan Brassfield Cogan

Susan Cogan is a full time writer and occasionally amuses herself as a graphic designer. She writes things that she enjoys and she enjoys quite a lot. She has been at various times a nurse’s aid, a belly dancer, an actress, a journalist, and a radio shock jock. Her career is long, varied, colorful, often exaggerated and occasionally untrue. Cogan is the author of many novels: Black Jade Dragon, Dragon Sword, Dragon Rising, The Button Man, The Last Gift, Heart of the Tengeri, Murder on the Waterfront and The Man Who Needed Killing. Her nonfiction works include: Hands of the Buddha, The Buddha’s Three Jewels, and The Pocket Darwin. She has also written numerous award winning short stories.

I found Dragon Sword immensely entertaining. It's a fast-paced, action-packed urban fantasy with a smart-arsed young heroine. Unlike most books I have read in this genre, though, it doesn't fall into the trap of taking itself too seriously, so a leaven of humour lifts the tone throughout, like yeast bubbling in warm bread. And the dragons! Ah, the dragons. Who doesn't love dragons, and good, noble dragons are even better.

This book is evidently the second in a series, and another common fantasy series mistake Cogan has deftly avoided is banging on about forerunners. There's enough backstory that one isn't left floundering, and one is aware that there's a book before this one, but the point is not laboured and one has all the information one needs.

As far as form goes, the work has been edited to a high standard, and I was delighted to see this, for it is a common failing with indie writers that quality issues are neglected. Chapter heading quotes from the Tao Te Ching provided a delightful counterpoint to the book.

You have subscribed to Smashwords Alerts new release notifications for Susan Brassfield Cogan.

You have been added to Susan Brassfield Cogan's favorite list.

You can also sign-up to receive email notifications whenever Susan Brassfield Cogan releases a new book.