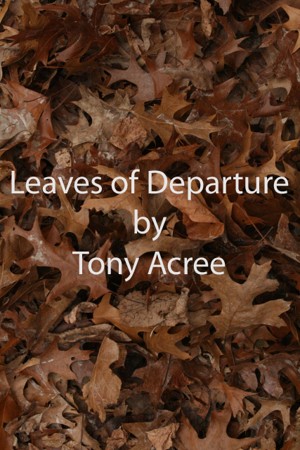 The Leaves of Departure

Tony Acree is is both an award winning author and publisher. His small press publishing house, Hydra Publications, won the Jason Sizemore award for outstanding small press. His latest novel, Revenge, was winner of best thriller novel at Imaginarium, one of the region’s largest’s writers conferences. All four of his novels are Amazon bestsellers.

Tony lives near Goshen Kentucky with his wife, twin girls, two female dogs, a female cat, and the way the goldfish looks at him, he believes she’s female too.

His work has appeared in Kentucky Monthly Magazine, The Cumberland, and Women of Curves Magazine. You can email him at Tonyacree@Gmail.com.

A fairly simple but very effective short story. In terms of character and setting it paints its pictures beautifully and is also eloquent in conveying mood and atmosphere.
Considering how sensitively crafted the rest of the story was, I felt that the resumé/biography of the old man's life seemed a little shoe-horned in, maybe the salient points could have been memories triggered by certain things the old man looked at or heard during his daughter's visit, but this is really a very minor criticism and didn't detract from an otherwise excellent piece of writing.

There are many ways to judge a story. I believe the most sincere measure a story's worth is whether it moves you. Using this metric, this is a superb story. I find my sight blurring several times when I read this story. It is moving and it has an impact on the reader. Wonderfully done! Thanks for sharing it!

(review of free book)
Marcia Carrington reviewed on May 5, 2012

An affecting, realistic short story with some fine moments of raw human emotion which are very tangible.

Enjoyed this very much. Very moving. It made me realize how much I miss my father.

You have subscribed to alerts for Tony Acree.

You have been added to Tony Acree's favorite list.

You can also sign-up to receive email notifications whenever Tony Acree releases a new book.