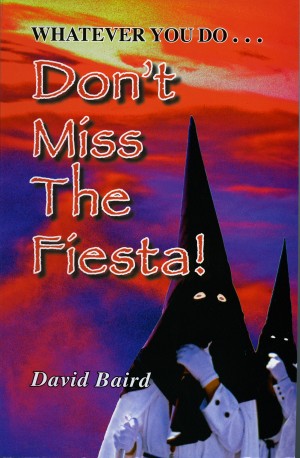 David Baird's books have been published in English, German and Spanish. This British-born author has worked on newspapers and magazines around the world, from Sydney and Ottawa to Hong Kong and London. For some years he has been based in Spain. His work has appeared in many publications, including The Economist, The Times of London, the International Herald Tribune, the Daily Telegraph, the Daily Express, the Boston Globe, The Scotsman and Maclean’s Magazine. He has twice been awarded Spain’s national travel-writing prize for foreign writers and journalists.
His book Between Two Fires, also published by Maroma Press, has won high praise from such respected historians as Paul Preston and Lorca biographer Ian Gibson. It is the first-ever account in English of a guerrilla conflict which raged in Spain in the 1940s and was unreported at the time due to the rigid censorship of the Franco regime.
Typhoon Season (a thriller set in Hong Kong) and Don't Miss The Fiesta! (a thriller-chiller set in Spain) are David Baird's first works of fiction. His other books include:
Between Two Fires – Guerrilla war in the Spanish sierras
Sunny Side Up –The 21st century hits a Spanish village
Inside Andalusia – A travel adventure in southern Spain
East of Malaga – Essential guide to the Axarquía and Costa Tropical
Versatile Guide to Spain
Back Roads of Southern Spain
The Incredible Gulf (travel in the Australian Outback)
Read more about David and his books at http://maromapress.wordpress.com/

Reviews of Don't Miss The Fiesta! by David Baird

With this engaging book, journalist and author David Baird (born in Shropshire, England) does a remarkable job both of entertaining and enlightening his readers. At first glance Don’t Miss the Fiesta! is just a compelling tale of mystery and adventure: Sully, a degenerate British fraudster takes refuge in a remote Andalusian mountain village, bringing with him his baggage of regrets and sordid secrets. But he’s unaware of the mysteries the seemingly innocent village of Benamargo harbors. A hint: The name itself denotes bitterness.

On another level the book is a vibrant fictionalized account of the secret lives of so many real-life Spanish villages which—at the time the story is set, in the 1980s—were still largely trapped between the hammer of the Spanish Civil War and its aftermath, and the anvil of cruel medieval religious “obligations”.

Don’t Miss the Fiesta is not only a formidable page-turner, but also an authoritative compendium of the ways and mores of Spain’s fast-disappearing rural societies. It’s like being taken on a tour of primitive Samoa by the great cultural anthropologist Margaret Mead. Your guide is an expert who has personally discovered during years of study every nuance of a fascinating-if-little-known society.
They are on familiar terms with its exterior manifestations and its most intimate secrets.

The Benamargos of this world are populated by frank and simple people, cured in adversity and inured with the patience of the poor. At the same time they are beset by ignorance and envy, religious fanaticism and hypocrisy. And an able manipulator with God on his side can turn these traits into toxic stew, as Sully discovers too late. Though Spain is fast outgrowing many of these aspects of what they call “la España negra”, in some places many of them still endure. In fact, this book might be a bellwether for the flocks of innocent Brits who are at this very moment lemming their way south to start new lives in “the real Spain”.

On arriving in Benamargo, Sully, the wide boy, congratulates himself on his choice of bolthole, though noting how severely limited and deadly boring it is. Before the story is over, however, he will miss that boredom. He will have befriended a deceitful barman, met up with a particularly unsavory ghost from the past, fallen in love, been betrayed by his most trustworthy friend in the village and demonized by a fanatical priest and his cohort of shrouded and sanctimonious bully boys.

All of these experiences have produced a remarkable transformation in Sully, and just as he is about to meet a spectacular end the author produces a welcome deus ex machina which… But let’s not spoil it for you. There’s a fascinating book here to be read. You don’t even have to go to a bookstore or order it online and wait a week for it to arrive. It’s an ebook. You can download it immediately!

You have subscribed to alerts for David Baird.

You have been added to David Baird's favorite list.

You can also sign-up to receive email notifications whenever David Baird releases a new book.