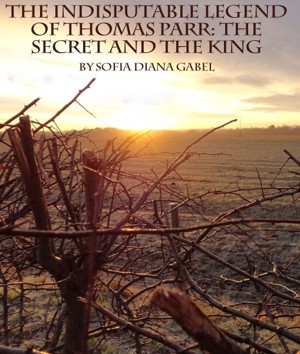 The Indisputable Legend of Thomas Parr: The Secret & The King

1583 England. Thomas Parr, 100 year-old simple country gent, forgetful, but with a high libido and a passion for cider ale, is kidnapped and taken to Ruthven Castle in Scotland where the Earl of Gowrie wants to know his secret to long life. During his time at Ruthven, Thomas meets the Earl's wife, Lady Daphne and the young 16 year old Scottish King James who has been held prisoner for a year. More
This is a fictionalized account of the real Thomas Parr who was the first person ever buried in Westminster Abbey's Poet's Corner. He is reputed to have lived to the age of 152 and was well recognized for his sexual abilities, even at such an age.

It’s 1583, England, and Thomas Parr is 100 years old. Thomas, a simple country gent, rather forgetful, but with a high libido that gets in the way of his daily life, and a passion for cider ale, is kidnapped and taken to Ruthven Castle in Scotland where the aging Earl of Gowrie will do almost anything to learn Thomas’ secret to long life.

Thomas doesn’t quite grasp why he’s in Scotland, but during his time at Ruthven, he meets the Earl's wife, Lady Daphne, and impresses her with his youthful exuberance. Lady Daphne realizes that Thomas might be able to help the young Scottish King James, only 16 years old, who has been held prisoner for a year by the Earl. Lady Daphne is disgusted by her husband and finds Thomas intriguing. Thomas soon finds himself mixed up in politics and the kidnapping of the young King, but all he really wants is to go home to his wife who will be very cross that he’s late for supper.
Available ebook formats: epub mobi pdf rtf lrf pdb txt html
First 20% Sample: epub mobi (Kindle) lrf more Online Reader
pdb
Price: $0.99 USD
Buy Add to Library Give as a Gift
How gifting works
Create Widget
Tags: humor country sex england historical scotland castle king james libido bawdy thomas parr
About Sofia Diana Gabel

I've been writing for so many years that I've lost count. I have a historical romantic suspense, I've had several novels published by Escargot Books and Music (they also handle the likes of Peter Mayle and Terence Stamp) and I'm working on the second installment of Thomas Parr. Check out my books at Escargot : http://escargotbooksandmusic.com/sofia-diana-gabel.html

You have subscribed to alerts for Sofia Diana Gabel.

You have been added to Sofia Diana Gabel's favorite list.

You can also sign-up to receive email notifications whenever Sofia Diana Gabel releases a new book.