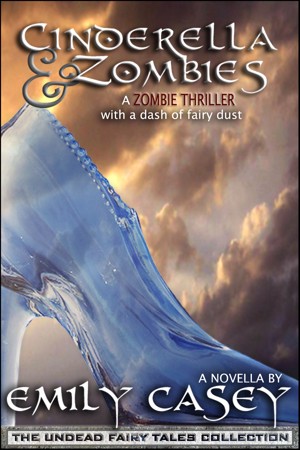 By Emily Casey
Rated 4.18/5 based on 11 reviews
A zombie thriller with a dash of fairy dust.

What happens when you take a classic fairy tale and add a few zombies to it? Cinderella goes from being a pretty-faced pushover to being the best zombie-slayer in the kingdom. But will that be enough when she's decked out in a ball gown and glass slippers? More
"More than anything, King Richard feared the zombie outbreak. Now, they neared his palace with every passing day, in growing numbers. One thing was clear to the King: his son must marry a zombie-killer."

Emily is a writer from Tallahassee who chases two crazy kids around the house all day before collapsing in front of her computer.

She writes everything from fairy tales to zombies, from middle grade to young adult. Emily writes what's exciting to her and just hopes someone else out there likes it.

Other little tid-bits: Emily's a dog person (he has a German Shepherd named Guybrush), she likes to run (and ran her first half marathon while 4 months pregnant) and majored in Psychology (which explains why she's a little nuts) at Florida State with a minor in English (which explains the whole writing thing).

Reviews of Cinderella and Zombies by Emily Casey

This story was kick ass. I really liked it. So far, I have been very lucky with fairy tale re-tellings, with or without the zombie factor.

Cinderella was definitely NOT a pushover in this story. She was a hard fighter from the very beginning. When the kingdom is under threat, she doesn't shy away from doing what she needs to do to help save it. She was even slightly arrogant about it, which made me laugh. Even the Prince was beneath her, at least in the beginning when her perception of him was that he was cowardly. But that if far from the truth. He is brave, if a little reckless. His so-called weakness is his father, King Richard, who isn't willing to have his son killed, or worse, as he needs his heir. If anything, the King is the simpering fool and I had an urge to reach into the book and slap him a few times.

I thought the whole idea of the poisonous effect of vegetables on the zombies to be really original, and at times comical. That pumpkin carriage scene was fabulous.

This story was full of action, comedic moments, and great characters. I can't believe it was only 73 pages! It felt like it was such a full story. Highly recommend this one. It was incredibly fun.

*I received a eBook copy of this book for free to review from the author; this in no way influenced my review, all opinions are 100% honest and my own.*

In my opinion this was a very fun, creative story with an interesting perspective on the zombie genre. The combination of a Cinderella type character set in a medieval period plagued with zombies worked great. If I could give this another half star I would cause this was a tough one for me but being that there seemed to be some things that a little more proofreading could have fixed and a few scenes that didn't line up right for me, I had to go with 3 instead of 4. If asked to read another Emily Casey story, I would say yes because of her great imagination.

I am not into the whole zombie trend, but I really enjoyed this novella. I thought it was a great twist on the Cinderella story.

This was a great twist on the common Cinderella story. Gone is the sweet, shy girl hello to the tough Zombie kicking "Cinders". This book was a great quick Novella and was well written. There were times where I laughed, times where I cheered and times when I grimaced (due to some gory parts). I liked the touch after where the author refreshed us of the original story of Cinderella but her version was much more interesting!

Zombies are one of my favorite pastimes. This is a quick read of 70 pages or so.

The Cinderella theme bothered me and I wasn’t sure how the author would fit it into the zombie arena. I was impressed. The book opens to Cinderella carrying out household tasks. Only there is a slight twist. Yes, she does do housework, she also has a garden she takes care of, not to mention her routine zombie checking of travelers entering the kingdom. Yes, this is a different Cinderella story.

What I liked: Cinderella is a knife-wielding zombie killer. I love a woman who can throw knives. No one has a better aim than her. She is sensible and well mannered, but will challenge authority to make her point. She views the citizens of the kingdom as hers and will sacrifice her life for theirs. She doesn’t crave attention, instead, hides from it. And yes, there is a glass slipper scene where the handsome prince will marry its owner. Cinderella hides and doesn’t come forward. She craves safety for the people, not attention for herself.

What I didn’t like: this was a short story that could have been explored more. When I reached the end, I wanted more.

Note: at the end is a bonus, the Cinderella story.
I loved this story and would recommend it to anyone looking for a short read. The author was able to weave her magic yet stay true to the original with interesting twists.

Loved it finally prince charming actually did things to be with cinderella. Great book if you havent read it your missing out.

This novella was a quick and easy read. It had an interesting, creative take on a classic fairy tale. In this story, Cinderella was not abused by her stepmother and stepsisters but she seemed to be the only responsible adult in the household. I loved that she was a strong, female character and SHE was the zombie slayer. I would have enjoyed a little more blood and gore but, all in all, it was a fun read. I look forward to reading more from this author.

***I received this book free of charge from the author through goodreads.com***

I’ve always loved the fairytale of Cinderella. I mean, every girl wants to be swept off her feet by a prince, right? Well, this girl just happens to be really good at killing zombies. And so is the prince.
Prince Kent loves to fight. He loves to help his people and be at the front lines, defending his kingdom. His father, on the other hand, wants to keep him safe and sound inside the palace walls. He also wants Kent to gent married. Immediately. When a gathering of the kingdom’s eligible women turns into a bloody war against the attacking zombies, Cinderella may be the only one that can save the day. She knows how to kill zombies and she has done so before. Cinderella and Prince Kent must team up to save the kingdom and the day.
Hands down, the best part of Cinderella and Zombies was the heroine, Cinderella. She doesn’t really care what other people think of her and she is not afraid to stand out of a crowd. She was strong and killed a zombie even when a soldier wouldn’t. He weapon of choice is the throwing knife and she has awesome aim. I mean AWESOME. But she can also use other things to kill zombies, such as a glass slipper. She was an amazing heroine that I thoroughly enjoyed reading about. Prince Kent was also an entertaining character because he really cared about his people and he was incredibly brave, so that makes him all right in my book. He’s also a prince, so that’s a plus too.
I really, really loved this rendition of Cinderella because I love zombies and Cinderella is a strong individual with larger problems than getting a prince to marry her. Also, in this book, Cinderella’s family wasn’t mean towards her, which is not traditional, but I liked it much better.
If you’re looking for a fun, fast read, I would definitely recommend this book. It had action, a great heroine, and a dash of romance. Amazing!

This was such a fun read! If you love zombies, get ready to dig in! If you love fairytale retellings... beware of ravaging hordes of the undead wreaking havoc with the prince's royal ball! I, myself, love both zombies and fairytales, and I felt this was a perfect combination of both.
Emily begins her tale in the Kingdom of Fae, alternating between Prince Kent and Cinderella, both swearing to protect their people from the undead plague. Although reluctant to join forces at first, together they become an unstoppable zombie killing machine.
The story moved with an unbelievably fast pace, not a single page without zombies. Throw in an inept king, an unconventional godmother of sorts (if she's from the land of Fae, does that make her a "fairy" godmother?), some slicing and dicing, with just a dash of rot and ruin, and I discovered a tale of true love and putrefaction.
Note for survivors: Who knew that a healthy diet of vegetables could protect you, not just from malnutrition, but from those pesky walking corpses! I don't know about you, but I'm headed to the grocery story to stock up for the zombie apocalypse!!

I'm not a fantasy fan; hard SF is more my forté. I saw some friends talking about this book on Twitter and thought I'd give it a whirl. I am glad I did! The reimagining was well done, and the story relied much more on character development than on the zombies. I could easily empathise with the characters. The Prince was trapped in a Greek drama; Fate in the form of his father, keeping him from his True Destiny. Cinderella was an accidental heroine mostly due to her pragmatic approach to life's ups and downs. The story keeps moving; it's a light read, but one I didn't want to put down.

Summary: I'm a hard SF fan, but the writing here is so good that I found myself wanting more at the end. Well done!

You have subscribed to alerts for Emily Casey.

You have been added to Emily Casey's favorite list.

You can also sign-up to receive email notifications whenever Emily Casey releases a new book.