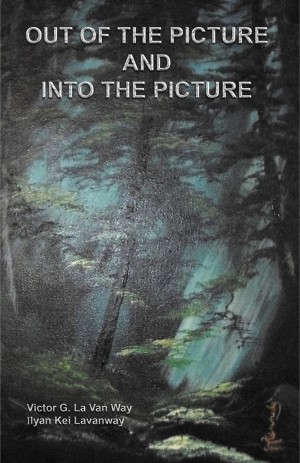 By Ilyan Kei Lavanway
Rated 3.50/5 based on 2 reviews
Out of the Picture and Into the Picture by Victor G. La Van Way and Ilyan Kei Lavanway is a fantasy adventure book containing two short stories about a pilot who is miraculously reunited with his father in a strange storm. Experience superimposed worlds and altered realities. Relive the thrill of flight as you follow this pilot's mysterious journey. Find a renewed hope and youthful determination. More
One thing leads to another as we weave our lives into the tapestry of eternity. An actual event inspires a painting, which inspires a story, which inspires a sequel involving another painting. Paintings have two sides. One of those sides is not the back of the canvas. Worlds overlap. Time shifts. Space twists. Experience the adventures of an aging pilot overtaken by a strange storm. Within the storm, he is miraculously reunited with his father. Getting home is not as simple as flying back the way he came. Enter an unusual forest with this pilot after a harrowing landing. Walk with him through a vortex that provides his only escape from an environment that appears to be swallowing him. His only way out is in. Come face to face with a sinister historical figure. Learn the origins of legendary creatures. Discover the name of a class of worlds you may have never before considered. Will this pilot ever make it home? Find out. Read Out of the Picture and Into the Picture, today. Don't wait another minute. A minute may not be what you think it is.

Out of the Picture and Into the Picture is a short book that I obtained for free using a coupon code on Smashwords last month. It tells of the story of a father, a son and a painting. He falls asleep by it and, he is soon woken by a plane emerging from it. It had been piloted by his son who has also come out from the picture.

I think that the story is reasonable, though far too short. It presents the occurence as an event of a problem with the fabric of space-time. However, due to the short length of the story, there's not really enough opportunity to discuss it properly and so it kind of leaves me bewildered more than intrigued. It's an interesting story in theory, but not well executed. A longer story might have provided them with a better opportunity to explain theories better. Also, the story presents various other ideas for this occurence, also being that it might be God's will. I like the idea of the story, I really do. However, if we look at the story in its entirety, it's essentially just about a plane in trouble and then emerging from a picture. After a little while, the plane then goes back into the picture and then somehow meets Cain, son of Adam. None of it is explained particularly well, though presents some interesting ideas. They're all interesting theories, but none are particularly discussed properly.

From when I read the beginning of this, I knew this was going to be a great story. I love how it all has to do with a painting, and how it just becomes another world- thanks to our imaginations. The descriptions and different point of views of both the father and the son were fantastic! This book really makes you think about what could be out there, or even, what is within our own world. This was exciting from start to finish! And it even gave a refreshing feeling at the end of it as well. I definetly recommend this story to anyone! No matter what genre you like- This book is not to be missed!