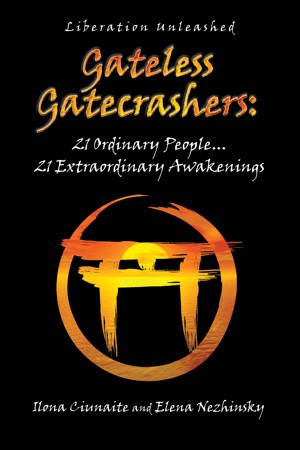 No such resource for spiritual seekers has ever been published, nor such a large collection of awakening accounts ever been assembled. Completely accessible, totally practical and wholly transparent for all who are interested, Gateless Gatecrashers makes a unique contribution to spiritual literature, and perhaps will lead you – when you are ready - to gatecrash!

Liberation Unleashed is a movement of volunteer guides who are dedicated to helping you end the spiritual search. We strive to transmit the message that separation is only a thought, that there is no entity behind the word "I", and all one needs to do is to look.
Available ebook formats: epub mobi pdf rtf lrf pdb txt html
First 20% Sample: epub mobi (Kindle) lrf more Online Reader
pdb
Price: $8.00 USD
Buy Add to Library Give as a Gift
How gifting works
Create Widget
Tags: awakening self help spiritual awakening self realization self awarness awakening enlightenment self improvement identity influence illusion of separation truth realization separate self
About Ilona Ciunaite

Ilona Ciunaite and Elena Nezhinsky are the founders of Liberation Unleashed, an international network of people dedicated to guiding people to awakening from the illusion of separation. Both Ilona and Elena have seen through the illusory nature of the apparent separate self, which is nothing more than a mental construct—a concept that when thoroughly questioned clearly reveals that there is nothing behind the word ‘me’ at all.

Ilona was born in Lithuania and now lives in the UK. She has a degree in psychology, but has never worked in the field; instead she works as a tattoo artist, running her own studio together with her husband. She is a simple and ordinary human with a mind set to focus on freedom for herself an those who find her. Her blog, “Marked, Eternal“, is collection of articles and conversations that demonstrate how easy it is to see that there is no self when one is ready and willing to look. She has always been interested in the ‘mind’ as such and enjoyed studying the subject from different angles. Observing her own mind led to a deep understanding of how the mind works, how to overcome confusion and free it from feedback loops. She has been a seeker like many others, but had never attended a retreat or satsang until after awakening.

Her work is inspired by Pamela Wilson’s methods and is a fusion of various methods she has picked up over years of inquiring into the mystery of mind. Her main focus and work is helping people end their seeking by inviting them to question their fundamental assumptions and look at their own direct experience. She does not give answers, but only questions. In this way a seeker may see what is going on for themselves, and free their minds from conditioned patterns, to explore whatever comes next. She has been guiding people at no charge through email and at TheGate forum for over a year, with great success, allowing seekers to clearly and deeply see for themselves that there is no separate entity, no ‘me’.

Elena Nezhinsky met her close friend and a senior teacher of the Gurdjieff Way in 1998, and since then began a serious investigation of the mind and feelings, and searching for the truth of being. The sudden death of her teacher brought her to a Vipassana meditation practice of mind purification, which she did diligently for 7 years in frequent silent retreats. After leaving Vipassana she found Adyashanti, and spent a week in retreat with him, which made her ponder that there are other ways to awakening. In 2010 Elena woke up to the reality of “no self” with the help of Direct Pointing. Since then she has been helping others to awaken and see the truth of anatta – no self with the same method.

Elena lives in New York City with her grown-up son Daniel and her dog Zenji. Her blog “Complete Humanity” is a collection of her work with people and personal writings. She is very transparent in sharing her journey of awakening and on-going integration.

Ilona and Elena met in London, which started the wave of guiding people through the gateless gate. Utilising the skills of other members of the LU group, they published a book called Gateless Gatecrashers, which is a great resource for those who are still seeking to end the spiritual search.

Liberation Unleashed is a rapidly expanding, international project that brings seekers together with those who have awakened and are dedicated to guiding or simply share experiences in a community that is based on honesty and love. There is no greater joy than bringing joy to other hearts and celebrating the gift of freedom.

You have subscribed to alerts for Ilona Ciunaite.

You have been added to Ilona Ciunaite's favorite list.

You can also sign-up to receive email notifications whenever Ilona Ciunaite releases a new book.