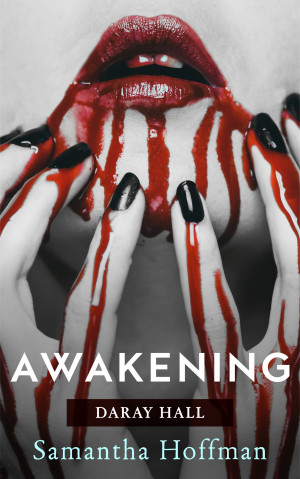 By Samantha Hoffman
Rated 4.50/5 based on 2 reviews
Kylie is devastated after her best friend’s suicide. When Kylie dies, she’s happy at the thought of seeing her again. What she doesn't plan on is waking up at a strange mansion and being told that she’s about to become a vampire. The moon Goddess Selene has chosen her for a reason. A series of murders shakes her new home, and she must protect those she loves, while looking for the killer. Age 15+ More
17 year old Kylie Redding is trying to recover from the emotional devastation of her best friend's suicide. She hates the people in her school, she hates her step-dad, and she hates life. When Kylie begins choking on her own blood, she's surprisingly happy at the thought of dying, because she'll get to see Tara again.
What she doesn't count on is awakening in a strange mansion, and finding out that she's just started her journey to becoming a vampire. The Moon Goddess Selene has chosen Kylie for a special reason, and it soon becomes apparent.

Tara is not dead, and she's been given a special gift by their loving goddess. As her best friend, it's only natural that Kylie step up and become her Protector, someone that will be willing to die for her in a seconds notice. When someone begins sacrificing residents of Daray Hall, her new home, Tara's gift of mind reading comes in handy, and the two begin searching for the elusive killer. However, this gift puts Tara in great danger, and Kylie begins to doubt her choices, and herself.

Together, they uncover a strange plot to summon an evil, vengeful goddess that will destroy the world with fire until only those that worship her are left. When the ultimate showdown happens, Kylie isn't sure what is going to happen; only that she needs to protect Tara with everything she has. No matter the cost.

About the Series: Daray Hall

Kylie Redding has a lot on her plate. Her mother is a hollow shell of her former self, her step-father is an abuser who resents her, and to top it all off, her best friend Tara just committed suicide. When Kylie begins the secretive and mysterious transition from human to vampire, she finds that Tara has made the transition before her. Reunited, Tara begins to help Kylie settle into her new life as a creature of the night, and Kylie begins her journey on the path of their loving goddess. Selene, the goddess of the moon and mother of the first and all vampires, has chosen both Tara and Kylie for very important reasons which begin to come clear as war breaks out. There is a war beginning, for control of the moon, and Kylie learns that she will have to play an integral part or risk losing everything and everyone she holds dear. Filled with love, betrayal, hope, and sacrifice, follow Kylie’s journey.

What I liked:
-The main character. Kylie was angry, strong-willed, loyal, and extremely protective despite her horrible home life and problems with her mother. She refused to give up no matter what happened, and she fought to prove everyone wrong.
-Kylie and Tara’s relationship. It was interesting to read about such a close relationship. I liked how the dynamic between the two of them didn’t really change after Kylie realized who she was as a person. If anything, their relationship may have gotten even stronger.
-The secondary characters. I liked how they didn’t immediately become best friends with Kylie, and how she was slow to trust them once everything started to happen.
-The Greek element. I thought the addition of Greek Mythology to the vampire creation story was a great touch and it set this story apart from other similar storylines. Selene was interesting even though she didn’t make much of an appearance until near the end.
-The ending. It was amazing. I didn’t see it coming until the very end, and I was sad with how things turned out, but oddly happy, too. The ending

What I disliked:
-The setting. It was pretty cliché and standard for the Paranormal Romance genre. I’ve read plenty of books about school-like mansions in the past, and there are only so many different ways to do it.
-Kaven’s lack of depth. Kylie’s mentor didn’t get much development other than slowly becoming her friend throughout the book. He was just kind of there to push her on.
-Intelligent or not? I was surprised Kylie didn’t figure out who the bad guys were sooner. She was portrayed as intelligent throughout the book, and I realized pretty soon who the bad people were, and I wanted to smack Kylie when she didn’t realize it.

The idea behind this book (vampire bodyguards, vampire goddesses, and vampires with special powers) has been done many times before, like with House of Night and Vampire Academy, but I still really loved it. The main character felt real and likeable, and I couldn’t help but love her. Her relationship with the person she’s sworn to protect was different because she was in love with her. The main character is bisexual, and I really liked that. She had a hard time figuring out who she was, and it made me relate to her all the more. There wasn’t much romance in this book, which I really liked, since most paranormal romance books seem to be love stories with a bit of plot mixed in. The action in this book is well-written (action scenes seem to be a specialty of this author) and the twist ending had me in shock.