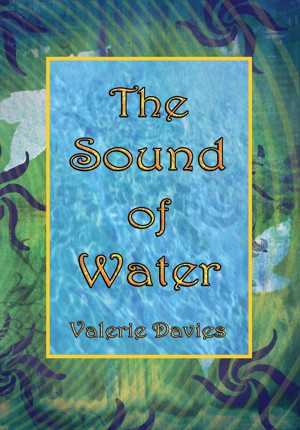 The Sound of Water

By Valerie Davies
A journal of two years lived vividly and deeply in a tiny fishing village - the seasons, birds, flowers, storms, the inner journey of mind and soul. I dip into the past - living in Hong Kong, Malaya, Belsen in post-war Germany - sleeping at haunted Waterloo... I reflect on books, food, family, gardens, events and intriguing people - Princess Diana, Larry Adler, Churchill and others. More
In ‘The Sound of Water’ Valerie Davies tells of two years lived vividly and deeply in a little New Zealand fishing village, where the birdsong, the seasons, the flowers and the storms are the backdrop to family life, to the inner life, to the enjoyment of food, books and history.

She writes of pleasures and depression, reunions with lost friends, memories of life in war-time England and post-war Germany, and encounters with both the famous and the forgotten.

She talks of surviving the Blitz in a sea-side hamlet near a frequently bombed naval base war-time England, living at Belsen in the Beast of Belsen’s flat, making music in Malaya as a school girl in the Cameron Highlands, and struggling with a broken marriage in Hong Kong.

It’s also a lively look at history, the causes of the First and Second World Wars, with interesting little-known facts, side-trips to the American Civil War and staying in a haunted hostel at Waterloo. It’s a lively look too, at intriguing people from ballerinas to musicians, statesmen to writers, ballerinas Baronova and Lopokova, harmonica player Larry Adler, Christian Barnard’s law-suit, Nehru and Lady Mountbatten’s love affair, Frances Partridge and many others.

Food figures greatly, with tempting recipes and mouth-watering meals, while books which range from the spiritual to history, favourite novels and writers, are savoured and assessed with idiosyncratic enjoyment.

If you love books, this is a book for you.

The sound of the sea echoes through every day of this part diary, part journal, part memoir. It’s a contemplative book about mindfulness, in the broad sense that it is about being aware and being conscious of the present. It savours day-to-day life, the little details as well as the vast panorama of history – in fact, it’s a celebration of life with some humour, some sadness and much enjoyment!

I’ve had an adventurous life, living through the Blitz in England, a stint in post-war Germany with my army family, living in the former "Beast of Belsen" residence at Belsen, travelling to school in Malaya in an armoured convoy through bandit-infested jungle, finding myself trapped in the middle of the first Red Guard march in Hong Kong during the Cultural revolution in China.

In New Zealand, I once woke to find a grey-suited man with a stocking over his head in our bedroom during my husband Pat Booth's fight to free an innocent man wrongly jailed for a double murder (he was pardoned at the end of the eight-year battle).

Then there was the time I found the wheels of my car had been tampered with to cause an accident when the Mr Asia drug ring – a world-wide drug ring my crusading journalist husband exposed - had put a price on his head.

I grew up in an army family, joining the British army myself. I was a captain when I married. Living in Hong Kong with my army husband, I had to learn journalism on the run when the marriage broke up in order to support my two children. Eventually I came to New Zealand with them aged five and six, knowing no-one, with no money, no job and no home, to start from scratch in a new country. We arrived with three suitcases, in which I’d packed sheets and cutlery to start a new home!

I was Woman's Editor of the South China Morning Post before leaving Hong Kong, and in New Zealand became a writer at the liberal paper the Auckland Star, where I wrote a popular column for twelve years, and became Woman's Editor, and at the same time wrote a column for families and children in the New Zealand Woman’s Weekly for fourteen years. For years the Solo Parent column I wrote made me to some extent a voice for lone parents when they had no voice.

Since leaving full-time journalism I’ve written for magazines, and written a few books, and am in the middle of two more... Nowadays, after twenty five years of counselling and personal growth myself, I also enjoy life-coaching, and watching people who’ve been burdened become light and joyful.

My main 'hobby' is the spiritual life, others are gardening, grandchildren, reading, cooking, moving house and restoring and re-decorating the new hovel, friends,
music, opera, pets and people watching ( there must be more).

Arthritis in my hands has compelled me to give up knitting, embroidery, and painting. I don’t have dogs any more, but over the years have had seventeen, mostly rescued, usually three at a time, including three afghans, two salukis, a borzoi, a labrador, six King Charles cavalier spaniels, a boxer, a mastiff-boxer cross, a mastiff, plus the lodgers – the dogs who came to spend the day with me while their owners were at work !

It isn’t just pets that I care about, I’m involved with several world –wide animal organisations both to save animals from being tortured and exploited (including bull-fighting and bear-baiting) – and to save wild animals whose habitats are being destroyed by hunting or clearing. And of course, like the rest of us, I worry about preserving our planet before it’s too late.

You have subscribed to alerts for Valerie Davies.

You have been added to Valerie Davies's favorite list.

You can also sign-up to receive email notifications whenever Valerie Davies releases a new book.