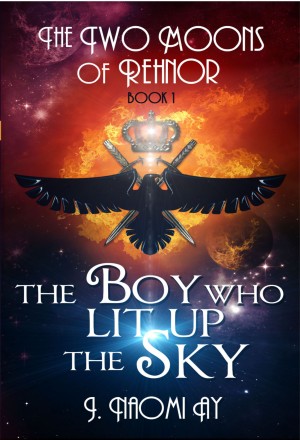 The Boy who Lit up the Sky (The Two Moons of Rehnor, Book 1)

By J. Naomi Ay
Rated 4.33/5 based on 3 reviews
After a thousand years of war, the Mishnese and Karupta have made peace by wedding the Mishnese Princess Royal to the Karupta Crown Prince. Their son whose birth was foretold ten centuries ago is destined to rule the entire planet and end the wars forever, except he has died, or so they have said. More
Lydia Kalila, the Princess Royal of Mishnah, is forced into marriage with the son of her country's mortal enemy for the sole purpose of producing an heir.  Duty comes before personal choice for a princess, especially when her country has been at war for more than a thousand years.  Lydia's pregnancy removes her brother and new husband from their respective lines of succession, placing her yet unborn infant at the head of both queues.  No one is happy about this, especially Lydia who dies during childbirth from wounds caused by the talon-like toenails of her very strange newborn son.
Grief stricken at the loss of his daughter, the Mishnese King hastily sends Senya, his infant grandson off to a decrepit inner city orphanage with the intent to retrieve him much later when things got sorted out.  At the orphanage, Senya is protected by the invalid Sister Meri who instantly falls in love with the little fellow.  She's not bothered at all by his strange telekinetic and telepathic powers, flickering pupil-less silver eyes, or wicked clawed toenails. The House Father takes a shine to the lad too, and when Senya is six years old, he is summoned to the Father's chamber.  The Father ends up in flames, forcing Meri and Senya out into a snow storm running for their lives.
Thus begins the tale of Senya, a prince created to be king of a planet but tossed aside until his twelfth birthday when Lt. Taner, a Royal Guard detective is sent to retrieve him.  It is unclear to all whether Senya is the product of something good or something evil, but in either case, it is very apparent that he is something more than just Lydia Kalila's son.
Download: epub mobi (Kindle) pdf more Online Reader
lrf pdb txt
Price: Free! USD
Add to Library
Create Widget
Tags: coming of age aliens superhero science fiction romance galactic empire dystopian
About J. Naomi Ay

Naomi lives in the north Olympic Peninsula and is mom to 3 and a Pomeranian. She has always been a fan of historical fiction, fantasy and science fiction and is known for having waited in line for seven hours for the opening of both the original Star Wars and Star Trek films.

Having been an accountant for more than twenty-five years, Naomi is now turning her attention full time to continuing The Two Moons of Rehnor series and the Time Tripping Adventure series as dreaming of fictional people is far more interesting than reconciling ledgers.

Reviews of The Boy who Lit up the Sky (The Two Moons of Rehnor, Book 1) by J. Naomi Ay

What an imaginative story!

As this genre is not my usual cup of tea, I had a little difficulty getting into the story at first. That and the main character of Senya, although starting out as a sympathetic little orphan, changes to an unlikeable street rat, and a brat in the Mishnese palace. However, he morphs into a likable, decent guy when he gets to the kingdom of his father's people.

Told from the viewpoint of several pivotal characters, sometimes seeing the same action through different eyes, the story is quite robust with loads of action and intrigue. However, parts seemed rushed, and subsequently, were momentarily confusing to me requiring re-reads of some areas. We are left with a definite cliffhanger. I am actually relieved that there are more books in the series already available for purchase so I can continue with the story immediately.

Not a bad first book. It felt a little rushed in places, but overall, good. Would like to read more to see where it goes.

In the first book of her The Two Moons of Rhenor series, Ms. Ay has created a whole new world. There are planets and moons we’ve never seen before, and kingdoms ruled by full-blooded people who make bad decisions. In an effort to unite two warring kingdoms, a marriage is arranged with the hopes of producing a king who will bring an end to war.

The result of this union is Senya, aka the boy who lit up the sky. He’s a beautiful baby with silver eyes that shine when he opens them and claws on his feet instead of toes. Senya’s mother dies in childbirth and his grandfather, the king of Mishnah, has Senya taken to a secret location, an orphan home run by the church, to protect him from the influence of his father, Sorkan, a karut from Karupatani.

While he is sequestered in the orphanage, Senya is cared for by Sister Meri, a woman who has suffered much, and she develops a deep affection for the baby. The more he is rejected by the other sisters, the more Meri loves him. As he grows, so do his powers and his beauty. His appearance attracts the unwanted attentions of the Father, the man overseeing the orphanage, and when the Father tries to force himself on Senya, the boy quickly dispatches the old priest, and he and Meri set out on their own. Senya grows up on the hard streets of Mishnah where he learns to depend on himself for his survival and develop his extraordinary powers.

Not only has the author created a this fabulously diverse new world, she has also invented names and places we’ve never heard before. The intricately woven story, held my attention from beginning to end and I look forward to delving into Part Two, My Enemy’s Son. I had the advantage of reading Meri, a sort of prequel to The Boy Who Lit U the Sky, so I knew Meri’s background and understood her motives. Ms. Ay has published several of these novelettes to enrich the reader’s experience and add depth to an already rich tapestry. I highly recommend the series to adults who love fantasy / science fiction stories.

You have subscribed to Smashwords Alerts new release notifications for J. Naomi Ay.

You have been added to J. Naomi Ay's favorite list.

You can also sign-up to receive email notifications whenever J. Naomi Ay releases a new book.