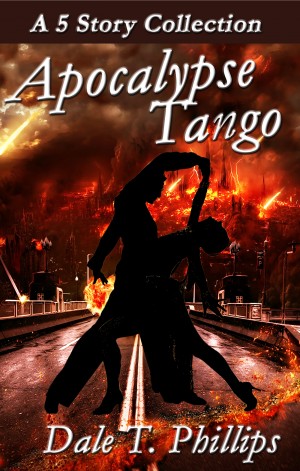 By Dale T. Phillips
Rated 4.00/5 based on 1 reviews
How does the world end? Self-launched bombs, asteroid from space, rain of fire, alien invasion, or virus and pandemic?
Maybe none of those. Maybe it's giant lobsters. Or zombies.
Here are five different takes on the end of the world-- as we know it. It's a tango done at the Apocalypse, dancing as the race of Man comes to a close. Come take a whirl. More
These five tales explore the concept of Apocalypse, world-ending disasters. Some methods are long, drawn-out affairs, others threaten us in the blink of an eye. Even if our take on Mayan calendars was all misinterpretation, there are plenty of other terrors that we could fall prey to. Here are stories to make you think, and some to make you laugh. Come do the Apocalypse Tango and dance while the world burns.

Some of these stories have been previously published in such places as Space and Time, Kasma, and Atomjack.

If you're in the mood to boogie with the apocalypse, then Apocalypse Tango by Dale T. Phillips might be just the thing to get you moving.

Of the five stories in this book, Yesterday and Today is probably the best. A condition called Presenility has swept through the world, and the survivors are left behind to wander the ruins, forced to live in the "now" in order to avoid backsliding into the labyrinths of their memories. It's a superb imagining of what might happen to the world if your own experiences become a danger. It's more than a little creepy, especially for those of us who fear diseases such as Alzheimer's.

God Save the Queen is an entertaining tale that reminds me of the B horror movies I used to love as a kid (and still do). Told through a series of headlines and news clippings, pollution and climate change have forced the sudden evolution of sea life...much to mankind's dismay.

Ruination Beach is a dark, brooding tale about drug-addled survivors trying to numb themselves against the horrors of an unnamed calamity. It's a bit cryptic, but its strong characters and sense of foreboding help it rise to an excellent conclusion. Human nature is alive and well in this one. A close second to Yesterday and Today.

Phillips succeeds in bringing a new aspect to the zombie sub-genre in Night of the Annoying Dead. I applaud the effort! This amusing and very short piece - almost flash fiction - could serve as the basis for a parody movie about the zombie apocalypse. The dead have awakened, but they're not after human flesh. They just want to go back to their old lives. Unfortunately, that's the problem.

Killer Angel is a bit of a moral tale about a mysterious woman from the sky sent to judge mankind. If we pass the test, we are left to our own devices, but if we don't we are destroyed. I have a problem with these sorts of tales, mostly because they often center around some arbitrary and collective judgment from some superpower, whether it be religious, alien etc. If said superpower were to exterminate all of mankind, wouldn't they be worse than, or bad as, any of us? Plus, I think the average human is mostly good, not mostly bad, as tales such as these seem to imply. Still, Killer Angel was executed well and achieved its goal: it made me think. It might not have been my favorite of the collection, but it may be yours. The quality of storytelling is certainly high.

Other story collections often concentrate on one theme - all horror, all sci-fi, all fantasy, etc. - but Apocalypse Tango swells and dips like a roller coaster, and each tale elicits a different emotional response. Overall I really liked this book, and it has the added advantage of being a quick and affordable read.