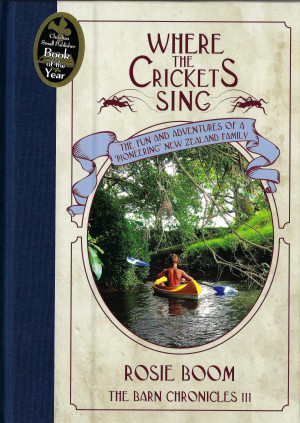 Where the Crickets Sing

Going on the pony trek to the beach is a dream come true for twelve-year-old Milly— trekking over high hills, swimming Peony in the sea, galloping along the beach. But when tragedy strikes, the excitement turns to tears.

Adventures, dramas, laughter and some tears are all part of the rich tapestry of the Boom family’s third year of living in their ninety-year-old barn. Milly’s days are full to the brim as she cares for her animals, milks her cow, enjoys adventures with her brothers and sisters, and helps Mum and Dad build the new family home. She is as happy as a cricket. But that doesn’t stop her lying awake at night, dreaming of hitching Peony to a wagon, climbing into the high wagon seat and picking up the reins…

Where the Crickets Sing, the third book in The Barn Chronicles series, invites the reader to join the Boom family in another year of homesteading in rural New Zealand.
The first book in the series, Where Lions Roar at Night, won the 2010 CALEB prize for Best Children’s Book, and the sequel, Where Arrows Fly was awarded the same prize in 2011.

“The Barn Chronicles are the best books I have ever read! They are full of fun, adventures, celebrations, broken legs, and heaps more! I would love to live in a barn like that and live on that property with a river, animals, swings, eels and everything else!” Maria (10)

I am a wife and homeschooling mother of six children, living in rural New Zealand. My passion is to encourage and inspire others. Over the years I have been able to communicate this passion through songwriting and singing, and public speaking. For the last twelve years I have discovered the thrill (and effectiveness!) of writing – my books travel far further afield than either time or money enable me to go myself. Let me tell you a bit about myself and the wonderful family I have been blessed with…

We are eight Booms living on a small homestead in Whangarei, New Zealand. Chris and I have been married now for nearly 25 years. I met him in New Zealand shortly before I went to Borneo to be involved in missionary work. Some months later he came over for a visit and declared his love. When I returned to NZ a year later our romance blossomed and we married in 1987. We have been blessed with six beautiful children! Now I am a full time home-schooling mother.

I spent some of my childhood in Papua New Guinea, where my parents were missionaries. It was a fantastic childhood – weird and wonderful pets, jungle clubs, huts by the river…

We came home to NZ when my twin sister Penny and I were ten. I went on to do my nursing training and worked for the next ten years in both public and private hospitals and as a practice nurse in a doctor’s surgery. I finished nursing when our oldest son was born, and since then have swapped my nurse’s uniform for my teacher’s garb. I have been homes-chooling now for 20 years and it has been my ‘magnum opus’. But whenever I get a spare moment, I love to write!

Chris and I are also singer/songwriters (in our spare time!), and have been travelling around New Zealand now for 25 years, singing at churches, camps, conferences etc - most anywhere we’re asked!
In 2007 we made the big move and bought 11 acres of land, complete with river and a ninety-year- old barn which was to become our home.
I never dreamed that the next four years would hold so much fun and so many memorable moments. We knocked the barn into some semblence of order, evicted the resident possum, put in a few windows and best of all, set up a Homewood stove which was to become the heart of the barn – cooking our food, heating our water and keeping us warm through the cold winter months. In the first six months, we survived two ‘one hundred year’ storms. The barn creaked and shook and groaned, but outlasted the onslaught. Those were exciting, nerve-wracking days and nights of gale force winds, rain so loud on the tin roof that we couldn’t hear ourselves shout, rescuing animals and anxiously watching to see if the barn roof would lift off.

In our second year I began writing Where Lions Roar at Night, a family read-aloud book telling all the fun and adventures we had in our first year of living in the barn. The second book in The Barn Chronicles, Where Arrows Fly, was published in 2010 and the third book in the series, Where The Crickets Sing,was released in May 2012, and the fourth book is on its way!

Reviews of Where the Crickets Sing by Rosie Boom

Well, I thought I might get away with a quick read before bed but this gorgeous book is another page-turner! I just couldn't bear to put it down. Rosie Boom's latest book from The Barn Chronicles - "Where the Crickets Sing" is full of vivid colour and adventure that invites the reader to join in the excitement...

eg."The sand became a blur as Peony pounded down the beach, her neck outstretched and mane flying. Milly leaned forward; her eyes squinted against the wind and stinging sand. She felt like she was in the middle of the chariot race with Ben Hur. She could see Pharaoh ahead of them, his white tail streaming. “Come on, Peony! Let’s catch them.”

...coupled with rich imagery that has my mouth watering over hot creamy porridge, and leaves a warm satisfied glow somewhere deep down. This book is another timeless heirloom to be treasured, savoured, read over and over again, and gifted to special friends and family.

You have subscribed to alerts for Rosie Boom.

You have been added to Rosie Boom's favorite list.

You can also sign-up to receive email notifications whenever Rosie Boom releases a new book.