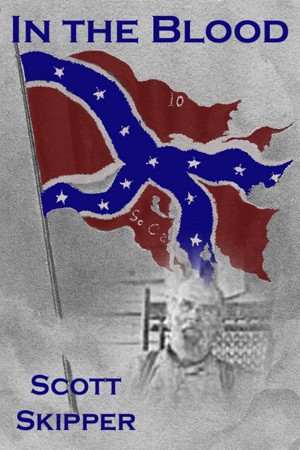 Rated 4.00/5 based on 3 reviews
Who was George Washington Skipper? He was a twice-wounded Confederate veteran who loved the ladies a little too much. He kept moving to stay ahead of his wives and the whipping post until Reconstruction and personal tragedy ran him to ground deep in the woods of South Carolina—with the wrong woman. More
This fictionalized account of my ancestor's remarkable life will probably get me struck from the Thanksgiving guest list, but those who aren't related will be amazed and amused. Then again, are you sure we're not related? Washington was born when John Quincy Adams was president and he died the week before the Titanic sank. During that long life he did some outrageous things. This account follows his early days in the Carolina low country, running from county to county avoiding the whipping post, through his Civil War battles, the misery of Reconstruction and his personal tragedies. In the Blood is based on fifteen years of genealogical research and punctuated with a little good clean fun.
Available ebook formats: epub mobi pdf rtf lrf pdb txt html
First 20% Sample: epub mobi (Kindle) lrf more Online Reader
pdb
Price: $2.99 USD
Buy Add to Library Give as a Gift
How gifting works
Create Widget
Tags: civil war biography carolinas genealogy historical 1800s scandalous klan humor adventure humor adult george washington skipper
About Scott Skipper

Reviews of In the Blood by Scott Skipper

When settling down to read a novel based on someone else's genealogical history there is always a niggling fear that it will be something like sitting through your neighbor's vacation slide show; interesting to them but interminable to you. In the Blood is nothing like this. Being based on genealogical research there is a certain amount of so-and-so beget so-and so, who despite being married to so-and-so beget so-and-so, but it is also a relatively fast paced read based on a truly interesting character who also happens to find himself in gripping circumstances.

George Washington Skipper is amorous to say the least, swept up in the Confederate spirit of the American Civil war, enlightened about the true doldrums of that (and probably every) war, discouraged by the perceived injustices of Reconstruction, and eventually the father of dozens of children by a variety of women, very few of whom he ever supported in any fashion. Ultimately he is seen to be an even minded good man, but he systematically wrongs woman after woman throughout the book. However, given the time in which he lived it is unfortunately true that his actions may not have been as unusual as it seems to the modern reader.

For me there was also a special thrill. As a member of 'the 10th' in the Confederate Army, Washington and his cohorts march back and forwards through middle Tennessee. This is home turf for me and it was really interesting to hear about the skirmishes that happened in towns I've lived in and around.

For those who have an interest the Civil War and the life of the average man (ie not the famous names of the times) In the Blood is a definite recommended read. I think there is a tendency to idealize the past and this book provides a refreshingly realistic look at a difficult period American History. Check it out.

(reviewed 28 days after purchase)
Ruth Ann Hixson reviewed on June 20, 2012
(no rating)
In The Blood

In the Blood by Scott Skipper is a novel based on Scott's ancestor. He wrote the story of George Washington Skipper from facts gleaned from written records and filled in the gaps with fiction.
Scott's ancestor was a womanizer who had three wives and was true to none of them. He walked out on Marina after he came in drunk and she sewed him up in the bedspread and beat him with an iron skillet.
Later, he married Helen (while he was still married to Mari-na). After his neighbor died, he took his widow to Georgetown where he set her up so he could visit her every time he freighted produce down the river.
When the Confederacy sought to withdraw from the Union and the Civil War broke out, Washington joined the army and went off to fight.
While serving on the side of the Confederacy, George Washington Skipper did his fair share of the fighting, and after being wounded, he persuaded a nurse to have sex with him. The first time he got leave to go home, he visited Helen; the second time, Mary.
The novel traces Washington life until his death in 1907. His fourth wife, Winnie, a Negro, survived him. It is an interesting read as a sequel to Family Traits.

REVIEW FOR IN THE BLOOD...

George Washington Skipper is the unlikely hero of this fascinating story by Scott Skipper. Set mainly in the American Civil War, In The Blood follows George Washington Skipper through thick and thin and those of us who knew rather too little before about this time in American history were thoroughly educated on the subject by the end of the war.
Scott tells the story through Washington (as most call him), a most colourful character and one whose impulses guide him far more than his intellect, although Washington is by no means a simpleton and is in many ways a wiley hero with a definite penchant for the ladies.
"My stars!" is the expletive Washington uses when life throws him a surprise or two and I for one found it had seeped into my own vocabulary before reaching the last page.
Without wishing to give anything away,Washington's proclivity for falling in love at the drop of a hat made for some amusing antics and indeed Washington, and many of the other characters, have a wonderfully comic turn of phrase even in times of adversity. One of those characters is a soldier by the name of Beatty who loves to tease Washington about the ladies and Washington is apt to reply: "One of these days, Beatty, I might mistake you for a yankee and shoot you on sight" but we are never in doubt these soldiers would lay down their life for each other should that prove necessary.
I personally felt that the first chapter was too complex for the average reader to digest as I struggled to understand all the ancestry and it reminded me of the early part of the Bible where everyone is begetting everyone else. In the end, I found myself skimming to the more meaty Chapter 2 and felt that was where the story really begins.

For anyone will a deep interest in American History, this book is a must and Scott's story-telling is wonderfully warm and descriptive. he has certainly done his homework and it shows. I was filled with admiration for this writer's skills.

This book should have its own genre; historical family fiction based on extensive geneology.

The story follows George Washington Skipper for 85 years as he produces dozens of children with multiple women and two wives (simultaneously) over a very lengthy life. GW is a bigamist, and a serial pro-creater, but for some reason he also seems like a man of his time and place. Perhaps his life would have been different had he been born and raised in one of the Colonial cities, but he wasn't, and so it wasn't. Although a prudish reader may be outraged with the life of GW Skipper, the author is neither endorsing nor romanticizing GW. He is reporting, in a fictionalized way, on a part of his family tree. This is historical fiction that is based in hard core genealogical research that is supported with primary sources. You can't make up a character like GW Skipper, you have to discover him. And when you discover a character like GW in your family tree, the temptation to write out the "bad bits" must be overwhelming. Kudos to the author for revealing this part of his family history, and for doing so in an enjoyable read. I found this book a very interesting trip through the years before the Civil War, during the build up to the Civil War, during the war itself, and throughout Reconstruction. If you are a fan of books like That Dark and Bloody River by Allen Eckert, then I think you will enjoy this book.