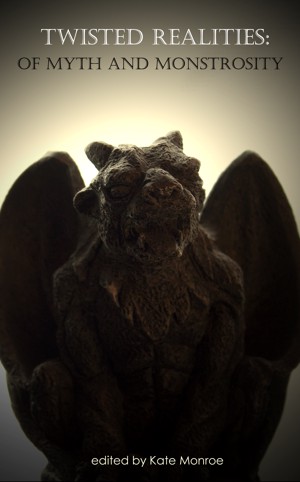 Twisted Realities: Of Myth and Monstrosity

By Sirens Call Publications Anthologies
Rated 4.50/5 based on 2 reviews
Myth or reality…

Explore the twelve tales of horror and intrigue in Twisted Realities: Of Myth and Monstrosity and ask yourself, what would you consider a fair price to pay for life immortal... or the chance of life at all? More
Myth or reality…

Explore the twelve tales of horror and intrigue in Twisted Realities: Of Myth and Monstrosity and ask yourself, what would you consider a fair price to pay for life immortal... or the chance of life at all?

Would a young woman pass up a shiny bauble if she believed it to be nothing more than a harmless trinket? What transpires once a year in a peaceful and remote village that no one will ever speak of? What better way for a broken man to honor a crippled existence than with a memorial of blood and vengeance? How could a disfigured woman ever dream of chancing across an object that would restore her beauty - and at what cost?

Follow the twists and turns of each writer as they delve into the legends of days gone by, as well as the consequences that are wrought when myths and monstrosities collide with our world.

Even amongst the mounting technology and digital enhancement that dominates the world today myths prevail, whether it be something as abstract as superstition or something as deep-rooted as curses and rituals, people still pass on twisted tales of fairies, goblins, the Underworld and the wrath of scorned Gods long forgotten but still ablaze with power. This collection of twelve short stories contain a cross section of legends and folklore.

'It Lives With Us' by Thomas James Brown: The small isolated town of Lynnwood offers a idyllic way of life, but each year when The Winter Soltice rolls around the people of the town hide in fear of what might come knocking on the door.
'Reemergence' by Nina D'Arcangela: The eldest son of a Sea Captain falls overboard during a horrendous storm. As the waves threaten to rob him of his life a beautiful woman who floats atop the waves offers her hand in rescue...but at what price?
'Mosaic' by Jonathan Templar: Andrea discovers the remnants of an old Roman mosaic which depicts a vicious act of violence. Does the mosaic explain why Andrea feels eyes watching her from the woods?
'Riddle Me Real' by Lisamarie Lamb: A very old being that has been made to feel redundant in today's times finds a novel way to make himself feel pertinent once more.
'Voices' by Kate Monroe: Maeve is a powerful being fixated on war and strife. Leading people astray is what she does best. Whether it's her nagging voice in your head or her body to die for, human ruin is never too far away from this powerful Goddess.
'Memorial' by Joseph A.Pinto: Two brothers war over a woman. Through torture and grief, one brother turns to masochistic means to keep close at hand the memory of his love.
'The Silver Comb' by J.Marie Ravenshaw: An innocent looking treasure discovered in the woods leads one young woman to a terrifying face to face with a dangerous spirit.
'Keine Solche Sache' by Edward Lorn: A German scientist, looking for easy funding for his own ground-breaking research agrees to an experiment that sees him birth a dreadfully dangerous otherworldly being.
'Hades and the Hydra' by Amber Keller: Hades takes a holiday above ground to show the world just what Armageddon really looks like. Who, if anyone, can save humanity?
'A Fair Price' by Alexa Muir: A couple take a break at their French villa. But the holiday suddenly turns nightmarish as a hidden secret is revealed and a bargain has to be made.
'Drakul' by K.Trap Jones: A satyr made to serve a God finds himself the victim of cruelty that robs him of his exulted position but vengeance is sweet when served cold from the gates of Hell.
'The Plight of Phaylen Ponsford' by Julianne Snow: Badly burned when young and left with terrible scars, Phaylen escapes into a world of archaeology. Could a beautiful find from the sands of Greece change Phaylen's luck?

You don't have to be into or informed about mythology for this book to appeal. In fact, with it's rich diversity of tales and tellings this book might just spark your interest into Gods of yore.
In turns creepy, chilling, sick and funny this book is very well written and edited and will definitely keep you engrossed. A different take on the horror field that's very well done.

Myths, folk lore, stories of the past are things that a reader can find in countless books. The stories of central characters are splashed across pages and often it can be hard to tell the good from the bad. In the Siren's Call Publication anthology, Twisted Realities: Of Myth and Monstrosity, some of these creatures are brought forth within the pages.

The anthology has short stories from many great authors who use their words to bring the creatures of old to life. Their stories will not only introduce you to a myth, or monster, but will make sure you understand who it is you are reading about. The stories encompass things from ancient Greece to those of ancient Ireland.

The stories cover things such as the Irish Morrigan, the satyrs, and a relation to Cerberus. The point of being vague on the stories themselves is to get people to pick up the anthology. In my personal opinion it's worth a read and fans of the old mythology will love the stories. Readers that are unaware of these stories will find themselves looking for more information about who, or what, they read about.

You have subscribed to alerts for Sirens Call Publications Anthologies.

Would you like to favorite Sirens Call Publications Anthologies?

You have been added to Sirens Call Publications Anthologies's favorite list.