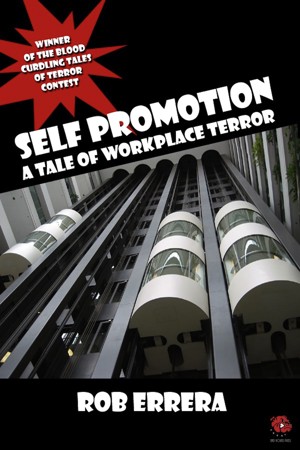 SELF PROMOTION: A Tale Of Workplace Terror

Rob Errera is many things to many people.

Rob Errera is a writer, editor, musician, and literary critic. His fiction, non-fiction, and essays have earned numerous awards, including the First Annual Bloodcurdling Tales of Terror Contest. His work has appeared in Starlog, New York Review of Science Fiction, Cinefantastique, Agony In Black, Wetbones, 2 A.M. Magazine, and Dark Recesses among others. He lives in New Jersey with his wife, two kids, and a bunch of rescued dogs and cats. His work is available in print and digital formats at all major online booksellers. He blogs at roberrera.com, and tweets at @haikubob.

Some days I’m awesome. Today, I sucked. Tomorrow I will be better.

Reviews of SELF PROMOTION: A Tale Of Workplace Terror by Rob Errera

Wow! This story gripped me and held me tight until the end. Good job with your plot & how you carried it out. This is outstanding and I will definitely check in to see what else you come up with. Thank you for sharing your work

You have subscribed to alerts for Rob Errera.

You have been added to Rob Errera's favorite list.

You can also sign-up to receive email notifications whenever Rob Errera releases a new book.