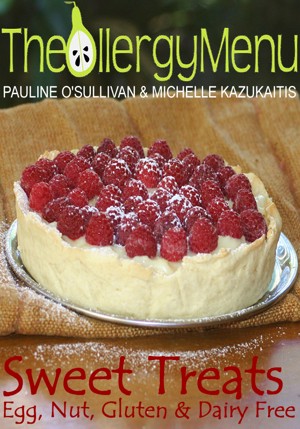 By Michelle Kazukaitis
Since the launch of The Allergy Menu website dedicated to delicious recipes specific to food allergies, intolerances & special dietary protocols, there has been much public demand for us to produce a cookbook! We have listened to your requests, and put together our very first ebook, a collection of our very favourite Cakes, Desserts, and Sweet Nibbles that are all Egg, Nut, Gluten & Dairy Free! More
Regardless of where you live in the world, now you can produce Allergy Safe Sweet Treats for any occasion!
As mothers, we understand that navigating the minefield of Birthday Parties and Social Events that require Cakes, Desserts & Sweet Treats is particularly stressful when Food Allergies or Restricted Dietary Protocols are thrown into the mix. That is why we decided to focus on this area for our very first ebook. The Allergy Menu Sweet Treats: Egg, Nut, Gluten & Dairy Free, contains recipes for Cakes, Slices, Puddings, Desserts & Sweet Treats that are ALL free of Nuts, Gluten, Eggs & Dairy Products.
Authors Pauline O'Sullivan & Michelle Kazukaitis are creators of The Allergy Menu website,the world's most comprehensive Food Allergy & Intolerance Resource. Through personal experience with multiple severe food intolerances, The Allergy Menu has been carefully designed to enable users to eliminate multiple allergens from recipes and menu plan according to specific diets for conditions such as Autism, Irritable Bowel Syndrome, Fructose Malabsorption, & Autoimmune disorders.
Pauline & Michelle have been featured on Television News & Current Affairs programs discussing their approach to Food Allergy Diets, and are being praised worldwide by Nutritionists, Allergists and Medical Professionals for their innovative approach to helping allergy sufferers to simplify their cooking and menu planning tasks.
"It is our passion and our mission to help assist those living with food allergies and restricted diets to improve their lifestyles and increase variety in their diets."
Available ebook formats: epub mobi pdf rtf lrf pdb txt html
First 10% Sample: epub mobi (Kindle) lrf more Online Reader
pdb
Price: $9.99 USD
Buy Add to Library Give as a Gift
How gifting works
Create Widget
Tags: allergy allergies food allergies allergy cookbook allergy free recipes allergy ebook allergy free allergy safe cooking cooking for allergies recipes for allergies
About Michelle Kazukaitis

Michelle has degrees in Accounting, I.T and Marketing. Born in New Zealand, Michelle has lived in Europe and the Pacific Islands. Most recently, after a couple of years living in Melbourne, Michelle has settled on the Sunshine Coast of Queensland for the last ten years.

A passionate foodie, Michelle embarked on a career in the culinary arts when she first left school. Although this experience was short-lived, Michelle has always continued her interest in food related pursuits.

Her love of cooking has found many creative expressions. To maintain a social life when their children were babies, Michelle and her friends developed a weekly gourmet cooking event. Once a week while the babies slept, the appointed cook (rotated in even cycles!) prepared a three course gourmet meal for the others using unfamiliar recipes.

Michelle and Pauline became fast friends when they met as new mothers in 2001 and they have continued to support each other through the highs and lows of life since then, including dealing with Pauline's childrens serious multiple food intolerances. It was therefore only natural, that they should team up to create ‘The Allergy Menu,” which encompasses their individual passions and complimentary skill sets.
The Allergy Menu (http://www.theallergymenu.com) took two years of research and development before it went live in early 2012 as the world's most comprehensive online recipe tool for those living on special diets.

You have subscribed to alerts for Michelle Kazukaitis.

You have been added to Michelle Kazukaitis's favorite list.

You can also sign-up to receive email notifications whenever Michelle Kazukaitis releases a new book.